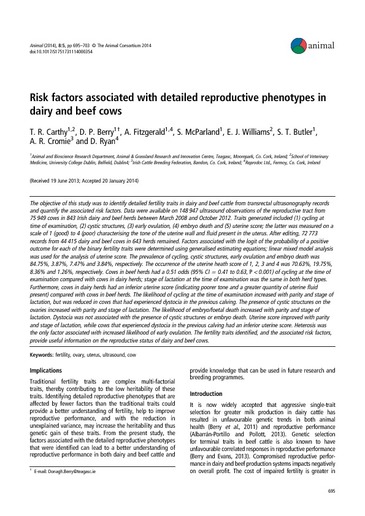 The objective of this study was to identify detailed fertility traits in dairy and beef cattle from transrectal ultrasonography records and quantify the associated risk factors. Data were available on 148 947 ultrasound observations of the reproductive tract from 75 949 cows in 843 Irish dairy and beef herds between March 2008 and October 2012. Traits generated included (1) cycling at time of examination, (2) cystic structures, (3) early ovulation, (4) embryo death and (5) uterine score; the latter was measured on a scale of 1 (good) to 4 (poor) characterising the tone of the uterine wall and fluid present in the uterus. After editing, 72 773 records from 44 415 dairy and beef cows in 643 herds remained. Factors associated with the logit of the probability of a positive outcome for each of the binary fertility traits were determined using generalised estimating equations; linear mixed model analysis was used for the analysis of uterine score. The prevalence of cycling, cystic structures, early ovulation and embryo death was 84.75%, 3.87%, 7.47% and 3.84%, respectively. The occurrence of the uterine heath score of 1, 2, 3 and 4 was 70.63%, 19.75%, 8.36% and 1.26%, respectively. Cows in beef herds had a 0.51 odds (95% CI = 0.41 to 0.63, P<0.001) of cycling at the time of examination compared with cows in dairy herds; stage of lactation at the time of examination was the same in both herd types. Furthermore, cows in dairy herds had an inferior uterine score (indicating poorer tone and a greater quantity of uterine fluid present) compared with cows in beef herds. The likelihood of cycling at the time of examination increased with parity and stage of lactation, but was reduced in cows that had experienced dystocia in the previous calving. The presence of cystic structures on the ovaries increased with parity and stage of lactation. The likelihood of embryo/foetal death increased with parity and stage of lactation. Dystocia was not associated with the presence of cystic structures or embryo death. Uterine score improved with parity and stage of lactation, while cows that experienced dystocia in the previous calving had an inferior uterine score. Heterosis was the only factor associated with increased likelihood of early ovulation. The fertility traits identified, and the associated risk factors, provide useful information on the reproductive status of dairy and beef cows.

Department of Agriculture, Food and the Marine; European Union