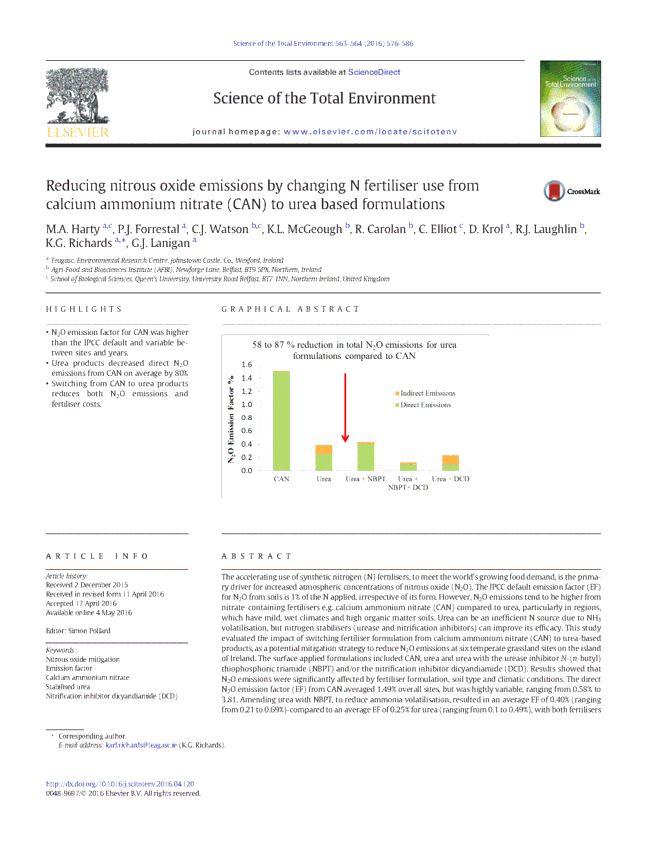 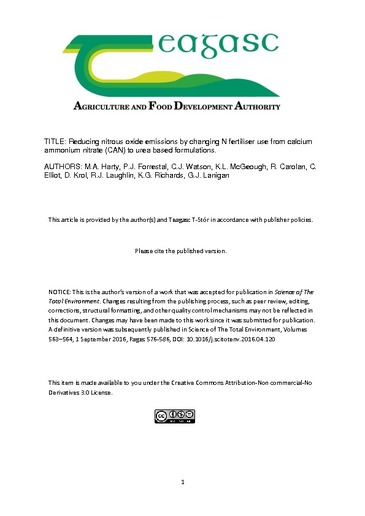 The accelerating use of synthetic nitrogen (N) fertilisers, to meet the world's growing food demand, is the primary driver for increased atmospheric concentrations of nitrous oxide (N2O). The IPCC default emission factor (EF) for N2O from soils is 1% of the N applied, irrespective of its form. However, N2O emissions tend to be higher from nitrate-containing fertilisers e.g. calcium ammonium nitrate (CAN) compared to urea, particularly in regions, which have mild, wet climates and high organic matter soils. Urea can be an inefficient N source due to NH3 volatilisation, but nitrogen stabilisers (urease and nitrification inhibitors) can improve its efficacy. This study evaluated the impact of switching fertiliser formulation from calcium ammonium nitrate (CAN) to urea-based products, as a potential mitigation strategy to reduce N2O emissions at six temperate grassland sites on the island of Ireland. The surface applied formulations included CAN, urea and urea with the urease inhibitor N-(n-butyl) thiophosphoric triamide (NBPT) and/or the nitrification inhibitor dicyandiamide (DCD). Results showed that N2O emissions were significantly affected by fertiliser formulation, soil type and climatic conditions. The direct N2O emission factor (EF) from CAN averaged 1.49% overall sites, but was highly variable, ranging from 0.58% to 3.81. Amending urea with NBPT, to reduce ammonia volatilisation, resulted in an average EF of 0.40% (ranging from 0.21 to 0.69%)-compared to an average EF of 0.25% for urea (ranging from 0.1 to 0.49%), with both fertilisers significantly lower and less variable than CAN. Cumulative N2O emissions from urea amended with both NBPT and DCD were not significantly different from background levels. Switching from CAN to stabilised urea formulations was found to be an effective strategy to reduce N2O emissions, particularly in wet, temperate grassland.