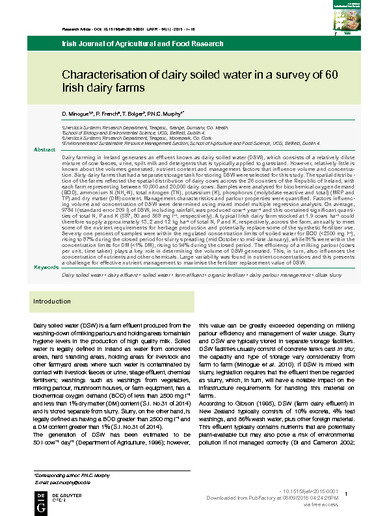 Dairy farming in Ireland generates an effluent known as dairy soiled water (DSW), which consists of a relatively dilute mixture of cow faeces, urine, spilt milk and detergents that is typically applied to grassland. However, relatively little is known about the volumes generated, nutrient content and management factors that influence volume and concentration. Sixty dairy farms that had a separate storage tank for storing DSW were selected for this study. The spatial distribution of the farms reflected the spatial distribution of dairy cows across the 26 counties of the Republic of Ireland, with each farm representing between 10,000 and 20,000 dairy cows. Samples were analysed for biochemical oxygen demand (BOD), ammonium N (NH4-N), total nitrogen (TN), potassium (K), phosphorus (molybdate-reactive and total) (MRP and TP) and dry matter (DM) content. Management characteristics and parlour properties were quantified. Factors influencing volume and concentration of DSW were determined using mixed model multiple regression analysis. On average, 9784 l (standard error 209 l) of DSW, including rainfall, was produced cow−1 year−1 and this contained significant quantities of total N, P and K (587, 80 and 568 mg l−1, respectively). A typical Irish dairy farm stocked at 1.9 cows ha−1 could therefore supply approximately 13, 2 and 12 kg ha−1 of total N, P and K, respectively, across the farm, annually to meet some of the nutrient requirements for herbage production and potentially replace some of the synthetic fertilizer use. Seventy one percent of samples were within the regulated concentration limits of soiled water for BOD (<2500 mg l−1), rising to 87% during the closed period for slurry spreading (mid October to mid-late January), while 81% were within the concentration limits for DM (<1% DM), rising to 94% during the closed period. The efficiency of a milking parlour (cows per unit, time taken) plays a key role in determining the volume of DSW generated. This, in turn, also influences the concentration of nutrients and other chemicals. Large variability was found in nutrient concentrations and this presents a challenge for effective nutrient management to maximise the fertilizer replacement value of DSW.
ae974a485f413a2113503eed53cd6c53
http://dx.doi.org/10.1515/ijafr-2015-0001