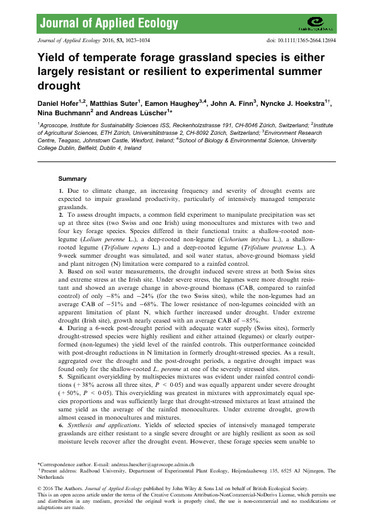 1.Due to climate change, an increasing frequency and severity of drought events are expected to impair grassland productivity, particularly of intensively managed temperate grasslands. 2.To assess drought impacts, a common field experiment to manipulate precipitation was set up at three sites (two Swiss and one Irish) using monocultures and mixtures with two and four key forage species. Species differed in their functional traits: a shallow-rooted non-legume (Lolium perenne L.), a deep-rooted non-legume (Cichorium intybus L.), a shallow-rooted legume (Trifolium repens L.) and a deep-rooted legume (Trifolium pratense L.). A 9-week summer drought was simulated, and soil water status, above-ground biomass yield and plant nitrogen (N) limitation were compared to a rainfed control. 3.Based on soil water measurements, the drought induced severe stress at both Swiss sites and extreme stress at the Irish site. Under severe stress, the legumes were more drought resistant and showed an average change in above-ground biomass (CAB, compared to rainfed control) of only −8% and −24% (for the two Swiss sites), while the non-legumes had an average CAB of −51% and −68%. The lower resistance of non-legumes coincided with an apparent limitation of plant N, which further increased under drought. Under extreme drought (Irish site), growth nearly ceased with an average CAB of −85%. 4.During a 6-week post-drought period with adequate water supply (Swiss sites), formerly drought-stressed species were highly resilient and either attained (legumes) or clearly outperformed (non-legumes) the yield level of the rainfed controls. This outperformance coincided with post-drought reductions in N limitation in formerly drought-stressed species. As a result, aggregated over the drought and the post-drought periods, a negative drought impact was found only for the shallow-rooted L. perenne at one of the severely stressed sites. 5.Significant overyielding by multispecies mixtures was evident under rainfed control conditions (+38% across all three sites, P < 0·05) and was equally apparent under severe drought (+50%, P < 0·05). This overyielding was greatest in mixtures with approximately equal species proportions and was sufficiently large that drought-stressed mixtures at least attained the same yield as the average of the rainfed monocultures. Under extreme drought, growth almost ceased in monocultures and mixtures. 6.Synthesis and applications. Yields of selected species of intensively managed temperate grasslands are either resistant to a single severe drought or are highly resilient as soon as soil moisture levels recover after the drought event. However, these forage species seem unable to cope with an extreme drought event. Combining species in mixtures can compensate for yield reductions caused by severe drought and it offers a practical management tool to adapt forage production to climate change.