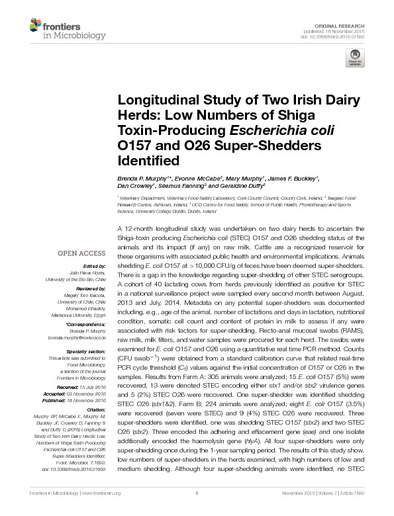 A 12-month longitudinal study was undertaken on two dairy herds to ascertain the Shiga-toxin producing Escherichia coli (STEC) O157 and O26 shedding status of the animals and its impact (if any) on raw milk. Cattle are a recognized reservoir for these organisms with associated public health and environmental implications. Animals shedding E. coli O157 at >10,000 CFU/g of feces have been deemed super-shedders. There is a gap in the knowledge regarding super-shedding of other STEC serogroups. A cohort of 40 lactating cows from herds previously identified as positive for STEC in a national surveillance project were sampled every second month between August, 2013 and July, 2014. Metadata on any potential super-shedders was documented including, e.g., age of the animal, number of lactations and days in lactation, nutritional condition, somatic cell count and content of protein in milk to assess if any were associated with risk factors for super-shedding. Recto-anal mucosal swabs (RAMS), raw milk, milk filters, and water samples were procured for each herd. The swabs were examined for E. coli O157 and O26 using a quantitative real time PCR method. Counts (CFU swab-1) were obtained from a standard calibration curve that related real-time PCR cycle threshold (Ct) values against the initial concentration of O157 or O26 in the samples. Results from Farm A: 305 animals were analyzed; 15 E. coli O157 (5%) were recovered, 13 were denoted STEC encoding either stx1 and/or stx2 virulence genes and 5 (2%) STEC O26 were recovered. One super-shedder was identified shedding STEC O26 (stx1&2). Farm B: 224 animals were analyzed; eight E. coli O157 (3.5%) were recovered (seven were STEC) and 9 (4%) STEC O26 were recovered. Three super-shedders were identified, one was shedding STEC O157 (stx2) and two STEC O26 (stx2). Three encoded the adhering and effacement gene (eae) and one isolate additionally encoded the haemolysin gene (hlyA). All four super-shedders were only super-shedding once during the 1-year sampling period. The results of this study show, low numbers of super-shedders in the herds examined, with high numbers of low and medium shedding. Although four super-shedding animals were identified, no STEC O157 or O26 were recovered from any of the raw milk, milk filter, or water samples. The authors conclude that this study highlights the need for further surveillance to assess the potential for environmental contamination and food chain security.