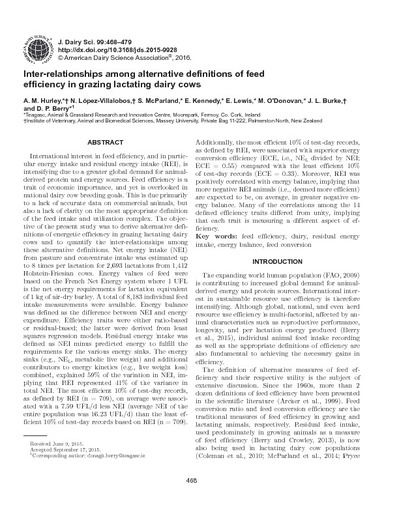 International interest in feed efficiency, and in particular energy intake and residual energy intake (REI), is intensifying due to a greater global demand for animal-derived protein and energy sources. Feed efficiency is a trait of economic importance, and yet is overlooked in national dairy cow breeding goals. This is due primarily to a lack of accurate data on commercial animals, but also a lack of clarity on the most appropriate definition of the feed intake and utilization complex. The objective of the present study was to derive alternative definitions of energetic efficiency in grazing lactating dairy cows and to quantify the inter-relationships among these alternative definitions. Net energy intake (NEI) from pasture and concentrate intake was estimated up to 8 times per lactation for 2,693 lactations from 1,412 Holstein-Friesian cows. Energy values of feed were based on the French Net Energy system where 1 UFL is the net energy requirements for lactation equivalent of 1 kg of air-dry barley. A total of 8,183 individual feed intake measurements were available. Energy balance was defined as the difference between NEI and energy expenditure. Efficiency traits were either ratio-based or residual-based; the latter were derived from least squares regression models. Residual energy intake was defined as NEI minus predicted energy to fulfill the requirements for the various energy sinks. The energy sinks (e.g., NEL, metabolic live weight) and additional contributors to energy kinetics (e.g., live weight loss) combined, explained 59% of the variation in NEI, implying that REI represented 41% of the variance in total NEI. The most efficient 10% of test-day records, as defined by REI (n = 709), on average were associated with a 7.59 UFL/d less NEI (average NEI of the entire population was 16.23 UFL/d) than the least efficient 10% of test-day records based on REI (n = 709). Additionally, the most efficient 10% of test-day records, as defined by REI, were associated with superior energy conversion efficiency (ECE, i.e., NEL divided by NEI; ECE = 0.55) compared with the least efficient 10% of test-day records (ECE = 0.33). Moreover, REI was positively correlated with energy balance, implying that more negative REI animals (i.e., deemed more efficient) are expected to be, on average, in greater negative energy balance. Many of the correlations among the 14 defined efficiency traits differed from unity, implying that each trait is measuring a different aspect of efficiency.