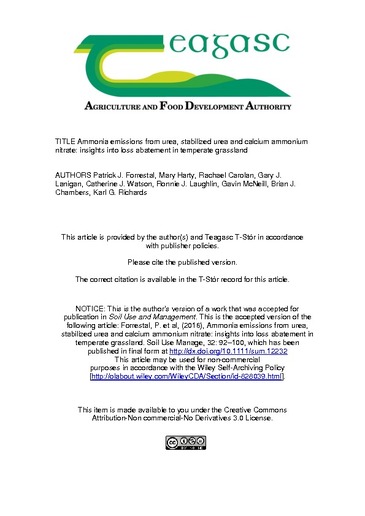 Fertilizer nitrogen (N) contributes to ammonia (NH3) emissions, which European Union member states have committed to reduce. This study focused on evaluating NH3-N loss from a suite of N fertilizers over multiple applications, and gained insights into the temporal and seasonal patterns of NH3-N loss from urea in Irish temperate grassland using wind tunnels. The fertilizers evaluated were calcium ammonium nitrate (CAN), urea and urea with the N stabilizers N-(n-butyl) thiophosphoric triamide (NBPT), dicyandiamide (DCD), DCD+NBPT and a maleic and itaconic acid polymer (MIP). 200 (and 400 for urea only) kg N/ha/yr was applied in five equal applications over the growing season at two grassland sites (one for MIP). Mean NH3-N losses from CAN were 85% lower than urea and had highly variable loss (range 45% points). The effect of DCD on NH3 emissions was variable. MIP did not decrease NH3-N loss, but NBPT caused a 78.5% reduction and, when combined with DCD, a 74% reduction compared with urea alone. Mean spring and summer losses from urea were similar, although spring losses were more variable with both the lowest and highest losses. Maximum NH3-N loss usually occurred on the second day after application. These data highlight the potential of stabilized urea to alter urea NH3-N loss outcomes in temperate grassland, the need for caution when using season as a loss risk guide and that urea hydrolysis in temperate grassland initiates quickly. Micrometeorological measurements focused specifically on urea are needed to determine absolute NH3-N loss levels in Irish temperate grassland.