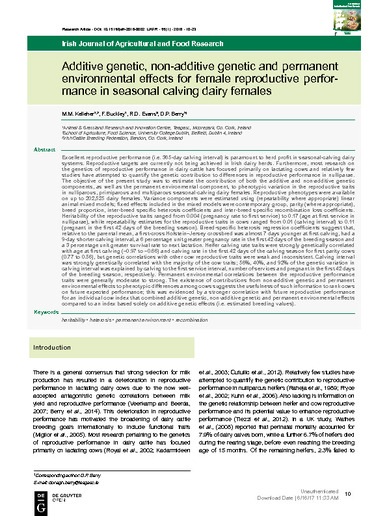 Excellent reproductive performance (i.e. 365-day calving interval) is paramount to herd profit in seasonal-calving dairy systems. Reproductive targets are currently not being achieved in Irish dairy herds. Furthermore, most research on the genetics of reproductive performance in dairy cattle has focused primarily on lactating cows and relatively few studies have attempted to quantify the genetic contribution to differences in reproductive performance in nulliparae. The objective of the present study was to estimate the contribution of both the additive and non-additive genetic components, as well as the permanent environmental component, to phenotypic variation in the reproductive traits in nulliparous, primiparous and multiparous seasonal-calving dairy females. Reproductive phenotypes were available on up to 202,525 dairy females. Variance components were estimated using (repeatability where appropriate) linear animal mixed models; fixed effects included in the mixed models were contemporary group, parity (where appropriate), breed proportion, inter-breed specific heterosis coefficients and inter-breed specific recombination loss coefficients. Heritability of the reproductive traits ranged from 0.004 (pregnancy rate to first service) to 0.17 (age at first service in nulliparae), while repeatability estimates for the reproductive traits in cows ranged from 0.01 (calving interval) to 0.11 (pregnant in the first 42 days of the breeding season). Breed-specific heterosis regression coefficients suggest that, relative to the parental mean, a first-cross Holstein–Jersey crossbred was almost 7 days younger at first calving, had a 9-day shorter calving interval, a 6 percentage unit greater pregnancy rate in the first 42 days of the breeding season and a 3 percentage unit greater survival rate to next lactation. Heifer calving rate traits were strongly genetically correlated with age at first calving (–0.97 to –0.66) and calving rate in the first 42 days of the calving season for first parity cows (0.77 to 0.56), but genetic correlations with other cow reproductive traits were weak and inconsistent. Calving interval was strongly genetically correlated with the majority of the cow traits; 56%, 40%, and 92% of the genetic variation in calving interval was explained by calving to the first service interval, number of services and pregnant in the first 42 days of the breeding season, respectively. Permanent environmental correlations between the reproductive performance traits were generally moderate to strong. The existence of contributions from non-additive genetic and permanent environmental effects to phenotypic differences among cows suggests the usefulness of such information to rank cows on future expected performance; this was evidenced by a stronger correlation with future reproductive performance for an individual cow index that combined additive genetic, non-additive genetic and permanent environmental effects compared to an index based solely on additive genetic effects (i.e. estimated breeding values).