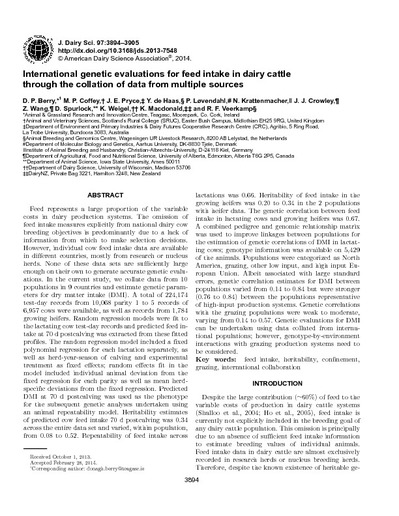 Feed represents a large proportion of the variable costs in dairy production systems. The omission of feed intake measures explicitly from national dairy cow breeding objectives is predominantly due to a lack of information from which to make selection decisions. However, individual cow feed intake data are available in different countries, mostly from research or nucleus herds. None of these data sets are sufficiently large enough on their own to generate accurate genetic evaluations. In the current study, we collate data from 10 populations in 9 countries and estimate genetic parameters for dry matter intake (DMI). A total of 224,174 test-day records from 10,068 parity 1 to 5 records of 6,957 cows were available, as well as records from 1,784 growing heifers. Random regression models were fit to the lactating cow test-day records and predicted feed intake at 70 d postcalving was extracted from these fitted profiles. The random regression model included a fixed polynomial regression for each lactation separately, as well as herd-year-season of calving and experimental treatment as fixed effects; random effects fit in the model included individual animal deviation from the fixed regression for each parity as well as mean herd-specific deviations from the fixed regression. Predicted DMI at 70 d postcalving was used as the phenotype for the subsequent genetic analyses undertaken using an animal repeatability model. Heritability estimates of predicted cow feed intake 70 d postcalving was 0.34 across the entire data set and varied, within population, from 0.08 to 0.52. Repeatability of feed intake across lactations was 0.66. Heritability of feed intake in the growing heifers was 0.20 to 0.34 in the 2 populations with heifer data. The genetic correlation between feed intake in lactating cows and growing heifers was 0.67. A combined pedigree and genomic relationship matrix was used to improve linkages between populations for the estimation of genetic correlations of DMI in lactating cows; genotype information was available on 5,429 of the animals. Populations were categorized as North America, grazing, other low input, and high input European Union. Albeit associated with large standard errors, genetic correlation estimates for DMI between populations varied from 0.14 to 0.84 but were stronger (0.76 to 0.84) between the populations representative of high-input production systems. Genetic correlations with the grazing populations were weak to moderate, varying from 0.14 to 0.57. Genetic evaluations for DMI can be undertaken using data collated from international populations; however, genotype-by-environment interactions with grazing production systems need to be considered.
ae974a485f413a2113503eed53cd6c53
http://dx.doi.org/10.3168/jds.2013-7548