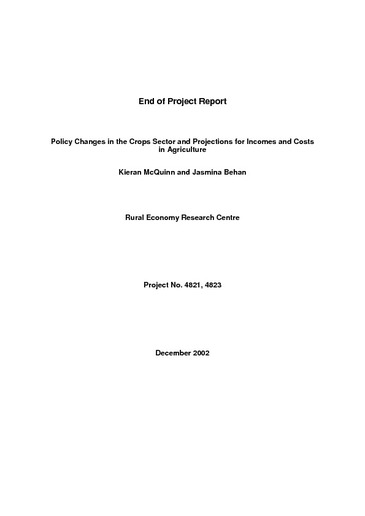 McQuinn, K., Behan, J., Policy Changes in the Crops Sector and Projections for Incomes and Costs in Agriculture, End of Project Reports, Teagasc, 2002.

The research conducted under the projects 4821 and 4823 represents a continuation of project 4345, which has developed economic models of the Irish crops sector, agricultural inputs and incomes. These models are integrated within the FAPRI-Ireland model of the agricultural sector which is a joint undertaking between the Food and Agricultural Policy Research Institute (FAPRI)1 and Teagasc. The crops model links to other Irish commodity models and an Irish inputs model to generate an income figure for Irish agriculture which is then projected forward on a 10 year basis. In this research, the models were used to produce projections for the Irish crop sector, inputs and incomes for the period 2000-2010. These projections were generated under three policy scenarios. First, the models were run assuming that agricultural policy would remain unchanged throughout the projection period. Subsequently, these “baseline” projections were compared with projections generated assuming alternative policy scenarios. In 2001, the baseline was compared with the policy scenario of reduced or eliminated export subsidies. This scenario was designed to reflect possible changes in trade policy resulting from the World Trade Organisation (WTO) Millennium Round negotiations. In 2002, the baseline projections (now modified to include the policy changes that occurred in 2001) were compared with projections under a policy scenario which included further extensification of livestock production. This scenario was designed as a second guess to the policy reform proposals under the Mid-Term review (MTR) of the EU Common Agricultural Policy (CAP), which became available in July 20022. The general objective is to generate projections for the Irish: 1. crop sector 2. agricultural inputs 3. agricultural incomes. The projections are generated under the existing policy framework as well as under alternative policy scenarios. Subsequently, the quantitative effect of each scenario is then gauged. The crops, inputs and incomes models are components of the FAPRI-Ireland modelling system developed to generate projections and conduct policy analysis for the Irish agricultural sector. The modelling framework consists of a system of econometrically estimated equations and linkages between agricultural variables across commodity sectors. Through the collaboration with FAPRI, models are also linked with their EU and world agricultural models. Therefore, in generating projections the following is ensured: • the projections of agricultural outputs in Ireland are generated taking formal account of international market developments, and • the most relevant policy levers associated with the CAP are fully incorporated within the projections. In 2001, the projections for Irish crops, inputs and incomes were generated under two policy scenarios. First, it was assumed that there would be no change in agricultural policy over the projection period. Second, the analysis included the effect of both a reduction in export refund limits and an elimination of export refunds. Under the 2001 baseline, Irish grain prices are projected to decrease in nominal terms over the period 2000-2010. The value of wheat output is projected to increase, while the value of barley output is set to decrease. The demand for inputs is projected to decline reflecting the reduced intensity of agricultural production. In aggregate terms it is projected that there would be little change in overall agricultural income. An export subsidy reduction would lead to a decline in grain prices relative to the baseline. This reduction would be more pronounced if export refunds were eliminated. While, agricultural income is not largely affected by the reduction in export subsidies, the elimination of refunds, leads to the reduction of 20 percent in income relative to the baseline projections. In 2002, projections, covering the period 2001-2010, were generated for a revised baseline and a policy scenario which included further extensification of livestock production. In general, the revised baseline projections are not significantly different from the baseline 2001. The extensification of livestock production is projected to lead to a reduction in inputs consumed, including feed, energy and fertiliser application. Under this scenario the Irish agricultural income in 2010 increases relative to the baseline projection, primarily due to the increase in the extensification payments.