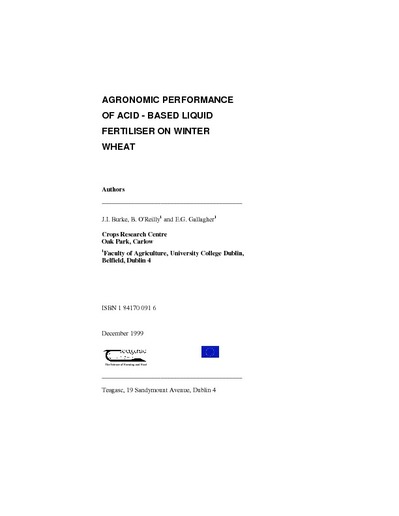 In the early 90’s, a new and novel means (liquid Flex system) of crop fertilisation was launched on the Irish market which was capable of supplying the crop’s total nitrogen, phosphorus, potassium and trace element requirement in liquid form, formulated to meet specific crop requirements. This system included novel chemistry, untested under Irish conditions and with little specific reference in the scientific literature. The chemistry of the liquid Flex system consists of an acid-based material. Stable compounds i.e. urea sulphate, urea phosphate and urea-metal complexes are formed by the reaction of urea with sulphuric acid, phosphoric acid and metal salts, respectively. Interest in these materials has been generated because they possess a number of physical and chemical characteristics, which, in theory, should be beneficial. However, the ability of the Flex system to effectively supply nutrients to the plant has not been researched. A field and greenhouse experimental programme was carried out over the three seasons, 1996-1998 to compare acid-base/urea-metal complexes with conventional fertilisers and to investigate whether this unconventional chemistry could lead to increased biological efficiency. The trial programme evaluated the Flex system, both as individual components and as a complete fertiliser. In field comparisons, formulation of P as urea phosphate gave similar results to conventional granular superphosphate in terms of grain yield, recovery of P by the crop and grain quality, regardless of soil type. This was supported by the results from the greenhouse experiment. In field comparisons of the main soil-applied liquid Flex source of N, i.e. N24 (urea with the addition of a standard level of acid and metal salts) with conventional N formulations, N24 gave poorer performance than CAN and granular urea in warm dry conditions due to insufficient inhibition to substantially reduce ammonia volatilisation. In wet conditions, the slow release of N from inhibited urea may have reduced the potential loss from leaching or denitrification, and led to a better performance than CAN or urea. The additional product of the Flex system, i.e. liquid Flex urea - N18 (urea with the addition of metal salts), applied as a foliar spray, was no more efficient than liquid urea as a late N source. The Flex urea had the disadvantage that it gave higher scorch levels than conventional liquid urea. When flag leaf scorch was excessive, grain yield was affected and quality suffered, with reduced grain and hectolitre weights. Where early application of P may have been critical to obtain maximum response, the N that accompanied the early application of P as urea phosphate was most likely lost through leaching. The application of large quantities of K in any one application with the liquid system was restricted due to solubility problems, which ultimately resulted in delayed application in soils with low K levels. The Flex system does not lead to increased biological efficiency. However, as farms get bigger and greater emphasis is placed on the reduction of water and air pollution, the liquid Flex system may become attractive because of its practical advantages in handling, storage and application and the ability to tailor-make specific formulations for given crop requirements.