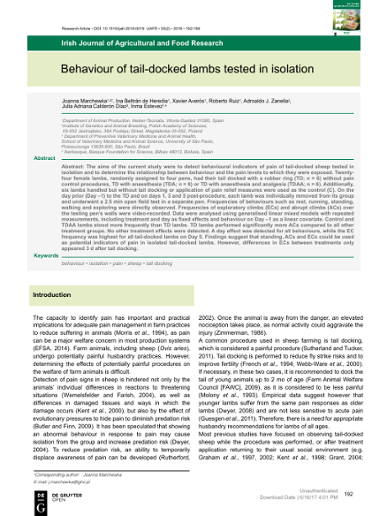 The aims of the current study were to detect behavioural indicators of pain of tail-docked sheep tested in isolation and to determine the relationship between behaviour and the pain levels to which they were exposed. Twenty-four female lambs, randomly assigned to four pens, had their tail docked with a rubber ring (TD; n = 6) without pain control procedures, TD with anaesthesia (TDA; n = 6) or TD with anaesthesia and analgesia (TDAA; n = 6). Additionally, six lambs handled but without tail docking or application of pain relief measures were used as the control (C). On the day prior (Day –1) to the TD and on days 1, 3 and 5 post-procedure, each lamb was individually removed from its group and underwent a 2.5 min open field test in a separate pen. Frequencies of behaviours such as rest, running, standing, walking and exploring were directly observed. Frequencies of exploratory climbs (ECs) and abrupt climbs (ACs) over the testing pen’s walls were video-recorded. Data were analysed using generalised linear mixed models with repeated measurements, including treatment and day as fixed effects and behaviour on Day –1 as a linear covariate. Control and TDAA lambs stood more frequently than TD lambs. TD lambs performed significantly more ACs compared to all other treatment groups. No other treatment effects were detected. A day effect was detected for all behaviours, while the EC frequency was highest for all tail-docked lambs on Day 5. Findings suggest that standing, ACs and ECs could be used as potential indicators of pain in isolated tail-docked lambs. However, differences in ECs between treatments only appeared 3 d after tail docking.

European Commission; Ministry for Economic Development and Competitiveness of the Basque Government