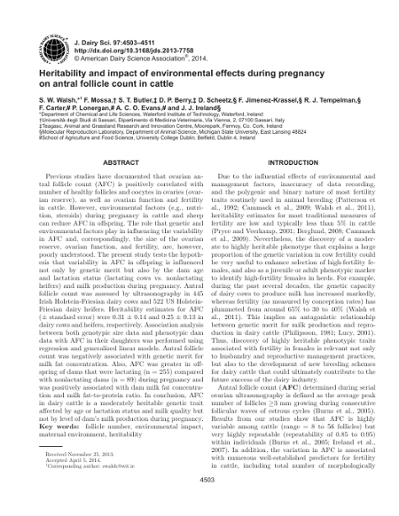 Previous studies have documented that ovarian antral follicle count (AFC) is positively correlated with number of healthy follicles and oocytes in ovaries (ovarian reserve), as well as ovarian function and fertility in cattle. However, environmental factors (e.g., nutrition, steroids) during pregnancy in cattle and sheep can reduce AFC in offspring. The role that genetic and environmental factors play in influencing the variability in AFC and, correspondingly, the size of the ovarian reserve, ovarian function, and fertility, are, however, poorly understood. The present study tests the hypothesis that variability in AFC in offspring is influenced not only by genetic merit but also by the dam age and lactation status (lactating cows vs. nonlactating heifers) and milk production during pregnancy. Antral follicle count was assessed by ultrasonography in 445 Irish Holstein-Friesian dairy cows and 522 US Holstein-Friesian dairy heifers. Heritability estimates for AFC (± standard error) were 0.31 ± 0.14 and 0.25 ± 0.13 in dairy cows and heifers, respectively. Association analysis between both genotypic sire data and phenotypic dam data with AFC in their daughters was performed using regression and generalized linear models. Antral follicle count was negatively associated with genetic merit for milk fat concentration. Also, AFC was greater in offspring of dams that were lactating (n = 255) compared with nonlactating dams (n = 89) during pregnancy and was positively associated with dam milk fat concentration and milk fat-to-protein ratio. In conclusion, AFC in dairy cattle is a moderately heritable genetic trait affected by age or lactation status and milk quality but not by level of dam’s milk production during pregnancy.