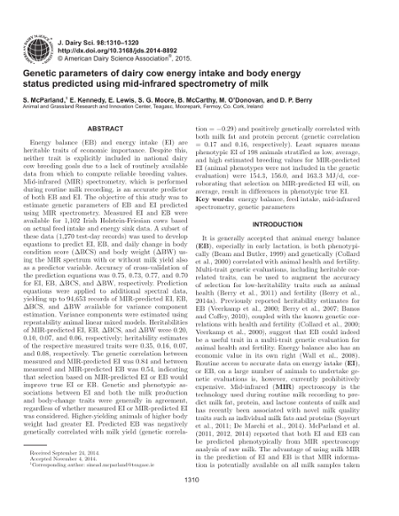 Energy balance (EB) and energy intake (EI) are heritable traits of economic importance. Despite this, neither trait is explicitly included in national dairy cow breeding goals due to a lack of routinely available data from which to compute reliable breeding values. Mid-infrared (MIR) spectrometry, which is performed during routine milk recording, is an accurate predictor of both EB and EI. The objective of this study was to estimate genetic parameters of EB and EI predicted using MIR spectrometry. Measured EI and EB were available for 1,102 Irish Holstein-Friesian cows based on actual feed intake and energy sink data. A subset of these data (1,270 test-day records) was used to develop equations to predict EI, EB, and daily change in body condition score (ΔBCS) and body weight (ΔBW) using the MIR spectrum with or without milk yield also as a predictor variable. Accuracy of cross-validation of the prediction equations was 0.75, 0.73, 0.77, and 0.70 for EI, EB, ΔBCS, and ΔBW, respectively. Prediction equations were applied to additional spectral data, yielding up to 94,653 records of MIR-predicted EI, EB, ΔBCS, and ΔBW available for variance component estimation. Variance components were estimated using repeatability animal linear mixed models. Heritabilities of MIR-predicted EI, EB, ΔBCS, and ΔBW were 0.20, 0.10, 0.07, and 0.06, respectively; heritability estimates of the respective measured traits were 0.35, 0.16, 0.07, and 0.08, respectively. The genetic correlation between measured and MIR-predicted EI was 0.84 and between measured and MIR-predicted EB was 0.54, indicating that selection based on MIR-predicted EI or EB would improve true EI or EB. Genetic and phenotypic associations between EI and both the milk production and body-change traits were generally in agreement, regardless of whether measured EI or MIR-predicted EI was considered. Higher-yielding animals of higher body weight had greater EI. Predicted EB was negatively genetically correlated with milk yield (genetic correlation = −0.29) and positively genetically correlated with both milk fat and protein percent (genetic correlation = 0.17 and 0.16, respectively). Least squares means phenotypic EI of 198 animals stratified as low, average, and high estimated breeding values for MIR-predicted EI (animal phenotypes were not included in the genetic evaluation) were 154.3, 156.0, and 163.3 MJ/d, corroborating that selection on MIR-predicted EI will, on average, result in differences in phenotypic true EI.