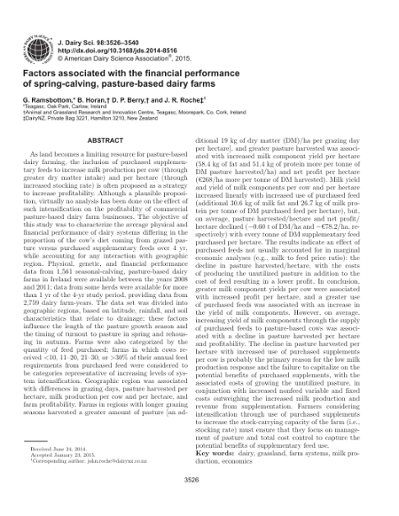 As land becomes a limiting resource for pasture-based dairy farming, the inclusion of purchased supplementary feeds to increase milk production per cow (through greater dry matter intake) and per hectare (through increased stocking rate) is often proposed as a strategy to increase profitability. Although a plausible proposition, virtually no analysis has been done on the effect of such intensification on the profitability of commercial pasture-based dairy farm businesses. The objective of this study was to characterize the average physical and financial performance of dairy systems differing in the proportion of the cow’s diet coming from grazed pasture versus purchased supplementary feeds over 4 yr, while accounting for any interaction with geographic region. Physical, genetic, and financial performance data from 1,561 seasonal-calving, pasture-based dairy farms in Ireland were available between the years 2008 and 2011; data from some herds were available for more than 1 yr of the 4-yr study period, providing data from 2,759 dairy farm-years. The data set was divided into geographic regions, based on latitude, rainfall, and soil characteristics that relate to drainage; these factors influence the length of the pasture growth season and the timing of turnout to pasture in spring and rehousing in autumn. Farms were also categorized by the quantity of feed purchased; farms in which cows received <10, 11–20, 21–30, or >30% of their annual feed requirements from purchased feed were considered to be categories representative of increasing levels of system intensification. Geographic region was associated with differences in grazing days, pasture harvested per hectare, milk production per cow and per hectare, and farm profitability. Farms in regions with longer grazing seasons harvested a greater amount of pasture [an additional 19 kg of dry matter (DM)/ha per grazing day per hectare], and greater pasture harvested was associated with increased milk component yield per hectare (58.4 kg of fat and 51.4 kg of protein more per tonne of DM pasture harvested/ha) and net profit per hectare (€268/ha more per tonne of DM harvested). Milk yield and yield of milk components per cow and per hectare increased linearly with increased use of purchased feed (additional 30.6 kg of milk fat and 26.7 kg of milk protein per tonne of DM purchased feed per hectare), but, on average, pasture harvested/hectare and net profit/hectare declined (−0.60 t of DM/ha and −€78.2/ha, respectively) with every tonne of DM supplementary feed purchased per hectare. The results indicate an effect of purchased feeds not usually accounted for in marginal economic analyses (e.g., milk to feed price ratio): the decline in pasture harvested/hectare, with the costs of producing the unutilized pasture in addition to the cost of feed resulting in a lower profit. In conclusion, greater milk component yields per cow were associated with increased profit per hectare, and a greater use of purchased feeds was associated with an increase in the yield of milk components. However, on average, increasing yield of milk components through the supply of purchased feeds to pasture-based cows was associated with a decline in pasture harvested per hectare and profitability. The decline in pasture harvested per hectare with increased use of purchased supplements per cow is probably the primary reason for the low milk production response and the failure to capitalize on the potential benefits of purchased supplements, with the associated costs of growing the unutilized pasture, in conjunction with increased nonfeed variable and fixed costs outweighing the increased milk production and revenue from supplementation. Farmers considering intensification through use of purchased supplements to increase the stock-carrying capacity of the farm (i.e., stocking rate) must ensure that they focus on management of pasture and total cost control to capture the potential benefits of supplementary feed use.
ae974a485f413a2113503eed53cd6c53
http://dx.doi.org/ 10.3168/jds.2014-8516