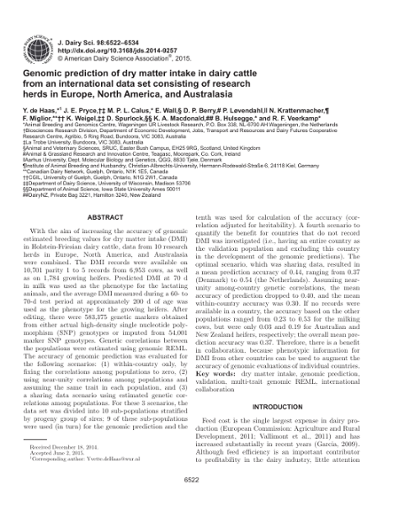 With the aim of increasing the accuracy of genomic estimated breeding values for dry matter intake (DMI) in Holstein-Friesian dairy cattle, data from 10 research herds in Europe, North America, and Australasia were combined. The DMI records were available on 10,701 parity 1 to 5 records from 6,953 cows, as well as on 1,784 growing heifers. Predicted DMI at 70 d in milk was used as the phenotype for the lactating animals, and the average DMI measured during a 60- to 70-d test period at approximately 200 d of age was used as the phenotype for the growing heifers. After editing, there were 583,375 genetic markers obtained from either actual high-density single nucleotide polymorphism (SNP) genotypes or imputed from 54,001 marker SNP genotypes. Genetic correlations between the populations were estimated using genomic REML. The accuracy of genomic prediction was evaluated for the following scenarios: (1) within-country only, by fixing the correlations among populations to zero, (2) using near-unity correlations among populations and assuming the same trait in each population, and (3) a sharing data scenario using estimated genetic correlations among populations. For these 3 scenarios, the data set was divided into 10 sub-populations stratified by progeny group of sires; 9 of these sub-populations were used (in turn) for the genomic prediction and the tenth was used for calculation of the accuracy (correlation adjusted for heritability). A fourth scenario to quantify the benefit for countries that do not record DMI was investigated (i.e., having an entire country as the validation population and excluding this country in the development of the genomic predictions). The optimal scenario, which was sharing data, resulted in a mean prediction accuracy of 0.44, ranging from 0.37 (Denmark) to 0.54 (the Netherlands). Assuming near-unity among-country genetic correlations, the mean accuracy of prediction dropped to 0.40, and the mean within-country accuracy was 0.30. If no records were available in a country, the accuracy based on the other populations ranged from 0.23 to 0.53 for the milking cows, but were only 0.03 and 0.19 for Australian and New Zealand heifers, respectively; the overall mean prediction accuracy was 0.37. Therefore, there is a benefit in collaboration, because phenotypic information for DMI from other countries can be used to augment the accuracy of genomic evaluations of individual countries.