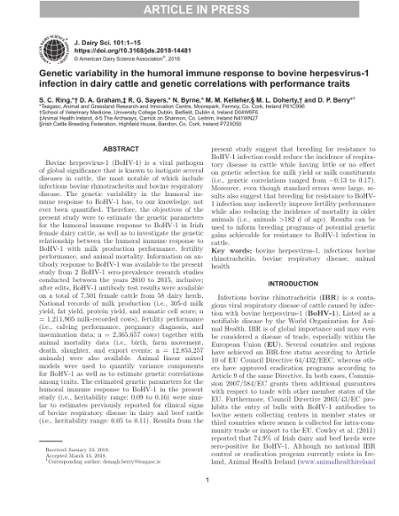 Bovine herpesvirus-1 (BoHV-1) is a viral pathogen of global significance that is known to instigate several diseases in cattle, the most notable of which include infectious bovine rhinotracheitis and bovine respiratory disease. The genetic variability in the humoral immune response to BoHV-1 has, to our knowledge, not ever been quantified. Therefore, the objectives of the present study were to estimate the genetic parameters for the humoral immune response to BoHV-1 in Irish female dairy cattle, as well as to investigate the genetic relationship between the humoral immune response to BoHV-1 with milk production performance, fertility performance, and animal mortality. Information on antibody response to BoHV-1 was available to the present study from 2 BoHV-1 sero-prevalence research studies conducted between the years 2010 to 2015, inclusive; after edits, BoHV-1 antibody test results were available on a total of 7,501 female cattle from 58 dairy herds. National records of milk production (i.e., 305-d milk yield, fat yield, protein yield, and somatic cell score; n = 1,211,905 milk-recorded cows), fertility performance (i.e., calving performance, pregnancy diagnosis, and insemination data; n = 2,365,657 cows) together with animal mortality data (i.e., birth, farm movement, death, slaughter, and export events; n = 12,853,257 animals) were also available. Animal linear mixed models were used to quantify variance components for BoHV-1 as well as to estimate genetic correlations among traits. The estimated genetic parameters for the humoral immune response to BoHV-1 in the present study (i.e., heritability range: 0.09 to 0.16) were similar to estimates previously reported for clinical signs of bovine respiratory disease in dairy and beef cattle (i.e., heritability range: 0.05 to 0.11). Results from the present study suggest that breeding for resistance to BoHV-1 infection could reduce the incidence of respiratory disease in cattle while having little or no effect on genetic selection for milk yield or milk constituents (i.e., genetic correlations ranged from −0.13 to 0.17). Moreover, even though standard errors were large, results also suggest that breeding for resistance to BoHV-1 infection may indirectly improve fertility performance while also reducing the incidence of mortality in older animals (i.e., animals >182 d of age). Results can be used to inform breeding programs of potential genetic gains achievable for resistance to BoHV-1 infection in cattle.