A Novel Multivariate Approach to Phenotyping and Association Mapping of Multi-Locus Gametophytic Self-Incompatibility Reveals S, Z, and Other Loci in a Perennial Ryegrass (Poaceae) Population 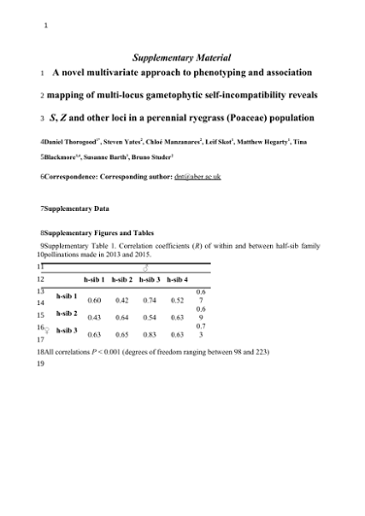 Self-incompatibility (SI) is a mechanism that many flowering plants employ to prevent fertilisation by self- and self-like pollen ensuring heterozygosity and hybrid vigour. Although a number of single locus mechanisms have been characterised in detail, no multi-locus systems have been fully elucidated. Historically, examples of the genetic analysis of multi-locus SI, to make analysis tractable, are either made on the progeny of bi-parental crosses, where the number of alleles at each locus is restricted, or on crosses prepared in such a way that only one of the SI loci segregates. Perennial ryegrass (Lolium perenne L.) possesses a well-documented two locus (S and Z) gametophytic incompatibility system. A more universal, realistic proof of principle study was conducted in a perennial ryegrass population in which allelic and non-allelic diversity was not artificially restricted. A complex pattern of pollinations from a diallel cross was revealed which could not possibly be interpreted easily per se, even with an already established genetic model. Instead, pollination scores were distilled into principal component scores described as Compatibility Components (CC1-CC3). These were then subjected to a conventional genome-wide association analysis. CC1 associated with markers on linkage groups (LGs) 1, 2, 3, and 6, CC2 exclusively with markers in a genomic region on LG 2, and CC3 with markers on LG 1. BLAST alignment with the Brachypodium physical map revealed highly significantly associated markers with peak associations with genes adjacent and four genes away from the chromosomal locations of candidate SI genes, S- and Z-DUF247, respectively. Further significant associations were found in a Brachypodium distachyon chromosome 3 region, having shared synteny with Lolium LG 1, suggesting further SI loci linked to S or extensive micro-re-arrangement of the genome between B. distachyon and L. perenne. Significant associations with gene sequences aligning with marker sequences on Lolium LGs 3 and 6 were also identified. We therefore demonstrate the power of a novel association genetics approach to identify the genes controlling multi-locus gametophytic SI systems and to identify novel loci potentially involved in already established SI systems.