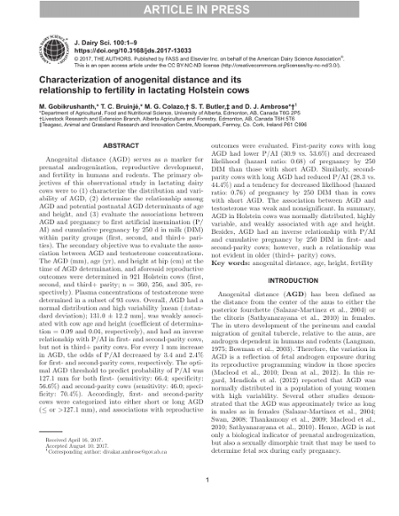 Anogenital distance (AGD) serves as a marker for prenatal androgenization, reproductive development, and fertility in humans and rodents. The primary objectives of this observational study in lactating dairy cows were to (1) characterize the distribution and variability of AGD, (2) determine the relationship among AGD and potential postnatal AGD determinants of age and height, and (3) evaluate the associations between AGD and pregnancy to first artificial insemination (P/AI) and cumulative pregnancy by 250 d in milk (DIM) within parity groups (first, second, and third+ parities). The secondary objective was to evaluate the association between AGD and testosterone concentrations. The AGD (mm), age (yr), and height at hip (cm) at the time of AGD determination, and aforesaid reproductive outcomes were determined in 921 Holstein cows (first, second, and third+ parity; n = 360, 256, and 305, respectively). Plasma concentrations of testosterone were determined in a subset of 93 cows. Overall, AGD had a normal distribution and high variability [mean (±standard deviation); 131.0 ± 12.2 mm], was weakly associated with cow age and height (coefficient of determination = 0.09 and 0.04, respectively), and had an inverse relationship with P/AI in first- and second-parity cows, but not in third+ parity cows. For every 1 mm increase in AGD, the odds of P/AI decreased by 3.4 and 2.4% for first- and second-parity cows, respectively. The optimal AGD threshold to predict probability of P/AI was 127.1 mm for both first- (sensitivity: 66.4; specificity: 56.6%) and second-parity cows (sensitivity: 46.0; specificity: 70.4%). Accordingly, first- and second-parity cows were categorized into either short or long AGD (≤ or >127.1 mm), and associations with reproductive outcomes were evaluated. First-parity cows with long AGD had lower P/AI (30.9 vs. 53.6%) and decreased likelihood (hazard ratio: 0.68) of pregnancy by 250 DIM than those with short AGD. Similarly, second-parity cows with long AGD had reduced P/AI (28.3 vs. 44.4%) and a tendency for decreased likelihood (hazard ratio: 0.76) of pregnancy by 250 DIM than in cows with short AGD. The association between AGD and testosterone was weak and nonsignificant. In summary, AGD in Holstein cows was normally distributed, highly variable, and weakly associated with age and height. Besides, AGD had an inverse relationship with P/AI and cumulative pregnancy by 250 DIM in first- and second-parity cows; however, such a relationship was not evident in older (third+ parity) cows.