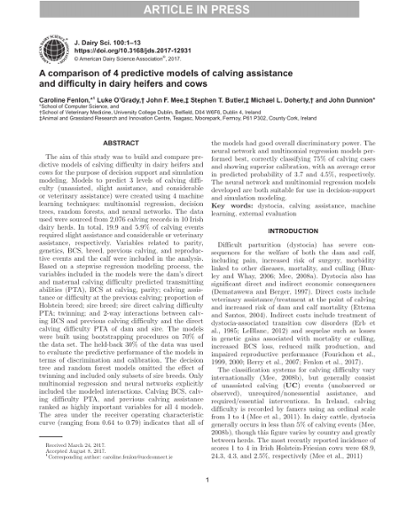 The aim of this study was to build and compare predictive models of calving difficulty in dairy heifers and cows for the purpose of decision support and simulation modeling. Models to predict 3 levels of calving difficulty (unassisted, slight assistance, and considerable or veterinary assistance) were created using 4 machine learning techniques: multinomial regression, decision trees, random forests, and neural networks. The data used were sourced from 2,076 calving records in 10 Irish dairy herds. In total, 19.9 and 5.9% of calving events required slight assistance and considerable or veterinary assistance, respectively. Variables related to parity, genetics, BCS, breed, previous calving, and reproductive events and the calf were included in the analysis. Based on a stepwise regression modeling process, the variables included in the models were the dam's direct and maternal calving difficulty predicted transmitting abilities (PTA), BCS at calving, parity; calving assistance or difficulty at the previous calving; proportion of Holstein breed; sire breed; sire direct calving difficulty PTA; twinning; and 2-way interactions between calving BCS and previous calving difficulty and the direct calving difficulty PTA of dam and sire. The models were built using bootstrapping procedures on 70% of the data set. The held-back 30% of the data was used to evaluate the predictive performance of the models in terms of discrimination and calibration. The decision tree and random forest models omitted the effect of twinning and included only subsets of sire breeds. Only multinomial regression and neural networks explicitly included the modeled interactions. Calving BCS, calving difficulty PTA, and previous calving assistance ranked as highly important variables for all 4 models. The area under the receiver operating characteristic curve (ranging from 0.64 to 0.79) indicates that all of the models had good overall discriminatory power. The neural network and multinomial regression models performed best, correctly classifying 75% of calving cases and showing superior calibration, with an average error in predicted probability of 3.7 and 4.5%, respectively. The neural network and multinomial regression models developed are both suitable for use in decision-support and simulation modeling.