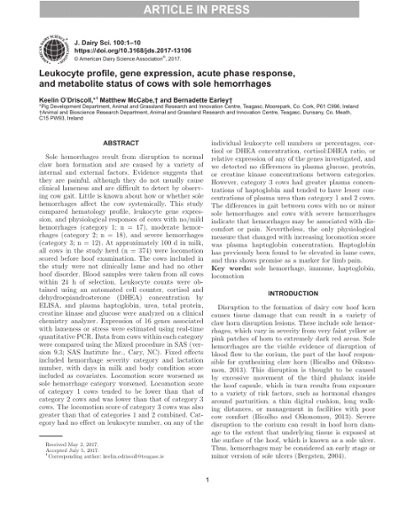 Sole hemorrhages result from disruption to normal claw horn formation and are caused by a variety of internal and external factors. Evidence suggests that they are painful, although they do not usually cause clinical lameness and are difficult to detect by observing cow gait. Little is known about how or whether sole hemorrhages affect the cow systemically. This study compared hematology profile, leukocyte gene expression, and physiological responses of cows with no/mild hemorrhages (category 1; n = 17), moderate hemorrhages (category 2; n = 18), and severe hemorrhages (category 3; n = 12). At approximately 100 d in milk, all cows in the study herd (n = 374) were locomotion scored before hoof examination. The cows included in the study were not clinically lame and had no other hoof disorder. Blood samples were taken from all cows within 24 h of selection. Leukocyte counts were obtained using an automated cell counter, cortisol and dehydroepiandrosterone (DHEA) concentration by ELISA, and plasma haptoglobin, urea, total protein, creatine kinase and glucose were analyzed on a clinical chemistry analyzer. Expression of 16 genes associated with lameness or stress were estimated using real-time quantitative PCR. Data from cows within each category were compared using the Mixed procedure in SAS (version 9.3; SAS Institute Inc., Cary, NC). Fixed effects included hemorrhage severity category and lactation number, with days in milk and body condition score included as covariates. Locomotion score worsened as sole hemorrhage category worsened. Locomotion score of category 1 cows tended to be lower than that of category 2 cows and was lower than that of category 3 cows. The locomotion score of category 3 cows was also greater than that of categories 1 and 2 combined. Category had no effect on leukocyte number, on any of the individual leukocyte cell numbers or percentages, cortisol or DHEA concentration, cortisol:DHEA ratio, or relative expression of any of the genes investigated, and we detected no differences in plasma glucose, protein, or creatine kinase concentrations between categories. However, category 3 cows had greater plasma concentrations of haptoglobin and tended to have lesser concentrations of plasma urea than category 1 and 2 cows. The differences in gait between cows with no or minor sole hemorrhages and cows with severe hemorrhages indicate that hemorrhages may be associated with discomfort or pain. Nevertheless, the only physiological measure that changed with increasing locomotion score was plasma haptoglobin concentration. Haptoglobin has previously been found to be elevated in lame cows, and thus shows promise as a marker for limb pain.