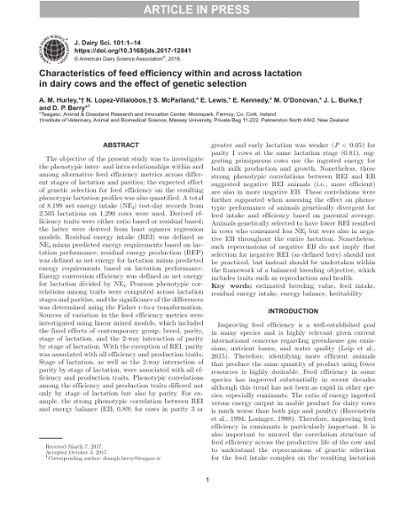 The objective of the present study was to investigate the phenotypic inter- and intra-relationships within and among alternative feed efficiency metrics across different stages of lactation and parities; the expected effect of genetic selection for feed efficiency on the resulting phenotypic lactation profiles was also quantified. A total of 8,199 net energy intake (NEI) test-day records from 2,505 lactations on 1,290 cows were used. Derived efficiency traits were either ratio based or residual based; the latter were derived from least squares regression models. Residual energy intake (REI) was defined as NEI minus predicted energy requirements based on lactation performance; residual energy production (REP) was defined as net energy for lactation minus predicted energy requirements based on lactation performance. Energy conversion efficiency was defined as net energy for lactation divided by NEI. Pearson phenotypic correlations among traits were computed across lactation stages and parities, and the significance of the differences was determined using the Fisher r-to-z transformation. Sources of variation in the feed efficiency metrics were investigated using linear mixed models, which included the fixed effects of contemporary group, breed, parity, stage of lactation, and the 2-way interaction of parity by stage of lactation. With the exception of REI, parity was associated with all efficiency and production traits. Stage of lactation, as well as the 2-way interaction of parity by stage of lactation, were associated with all efficiency and production traits. Phenotypic correlations among the efficiency and production traits differed not only by stage of lactation but also by parity. For example, the strong phenotypic correlation between REI and energy balance (EB; 0.89) for cows in parity 3 or greater and early lactation was weaker for parity 1 cows at the same lactation stage (0.81), suggesting primiparous cows use the ingested energy for both milk production and growth. Nonetheless, these strong phenotypic correlations between REI and EB suggested negative REI animals (i.e., more efficient) are also in more negative EB. These correlations were further supported when assessing the effect on phenotypic performance of animals genetically divergent for feed intake and efficiency based on parental average. Animals genetically selected to have lower REI resulted in cows who consumed less NEI but were also in negative EB throughout the entire lactation. Nonetheless, such repercussions of negative EB do not imply that selection for negative REI (as defined here) should not be practiced, but instead should be undertaken within the framework of a balanced breeding objective, which includes traits such as reproduction and health.