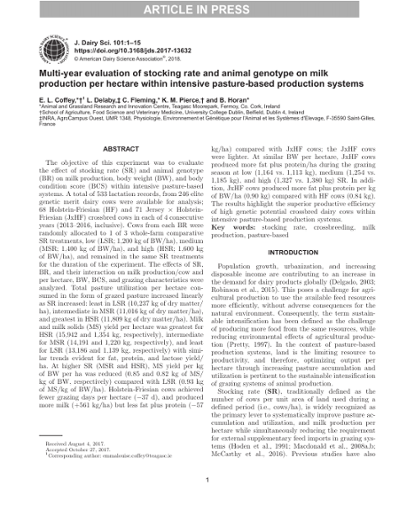 The objective of this experiment was to evaluate the effect of stocking rate (SR) and animal genotype (BR) on milk production, body weight (BW), and body condition score (BCS) within intensive pasture-based systems. A total of 533 lactation records, from 246 elite genetic merit dairy cows were available for analysis; 68 Holstein-Friesian (HF) and 71 Jersey × Holstein-Friesian (JxHF) crossbred cows in each of 4 consecutive years (2013–2016, inclusive). Cows from each BR were randomly allocated to 1 of 3 whole-farm comparative SR treatments, low (LSR; 1,200 kg of BW/ha), medium (MSR; 1,400 kg of BW/ha), and high (HSR; 1,600 kg of BW/ha), and remained in the same SR treatments for the duration of the experiment. The effects of SR, BR, and their interaction on milk production/cow and per hectare, BW, BCS, and grazing characteristics were analyzed. Total pasture utilization per hectare consumed in the form of grazed pasture increased linearly as SR increased: least in LSR (10,237 kg of dry matter/ha), intermediate in MSR (11,016 kg of dry matter/ha), and greatest in HSR (11,809 kg of dry matter/ha). Milk and milk solids (MS) yield per hectare was greatest for HSR (15,942 and 1,354 kg, respectively), intermediate for MSR (14,191 and 1,220 kg, respectively), and least for LSR (13,186 and 1,139 kg, respectively) with similar trends evident for fat, protein, and lactose yield/ha. At higher SR (MSR and HSR), MS yield per kg of BW per ha was reduced (0.85 and 0.82 kg of MS/kg of BW, respectively) compared with LSR (0.93 kg of MS/kg of BW/ha). Holstein-Friesian cows achieved fewer grazing days per hectare (−37 d), and produced more milk (+561 kg/ha) but less fat plus protein (−57 kg/ha) compared with JxHF cows; the JxHF cows were lighter. At similar BW per hectare, JxHF cows produced more fat plus protein/ha during the grazing season at low (1,164 vs. 1,113 kg), medium (1,254 vs. 1,185 kg), and high (1,327 vs. 1,380 kg) SR. In addition, JxHF cows produced more fat plus protein per kg of BW/ha (0.90 kg) compared with HF cows (0.84 kg). The results highlight the superior productive efficiency of high genetic potential crossbred dairy cows within intensive pasture-based production systems.