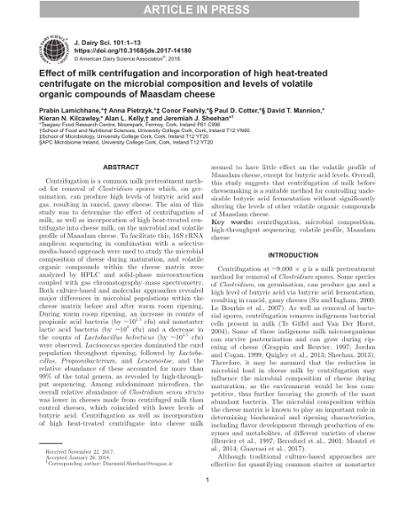 Centrifugation is a common milk pretreatment method for removal of Clostridium spores which, on germination, can produce high levels of butyric acid and gas, resulting in rancid, gassy cheese. The aim of this study was to determine the effect of centrifugation of milk, as well as incorporation of high heat-treated centrifugate into cheese milk, on the microbial and volatile profile of Maasdam cheese. To facilitate this, 16S rRNA amplicon sequencing in combination with a selective media-based approach were used to study the microbial composition of cheese during maturation, and volatile organic compounds within the cheese matrix were analyzed by HPLC and solid-phase microextraction coupled with gas chromatography–mass spectrometry. Both culture-based and molecular approaches revealed major differences in microbial populations within the cheese matrix before and after warm room ripening. During warm room ripening, an increase in counts of propionic acid bacteria (by ∼101.5 cfu) and nonstarter lactic acid bacteria (by ∼108 cfu) and a decrease in the counts of Lactobacillus helveticus (by ∼102.5 cfu) were observed. Lactococcus species dominated the curd population throughout ripening, followed by Lactobacillus, Propionibacterium, and Leuconostoc, and the relative abundance of these accounted for more than 99% of the total genera, as revealed by high-throughput sequencing. Among subdominant microflora, the overall relative abundance of Clostridium sensu stricto was lower in cheeses made from centrifuged milk than control cheeses, which coincided with lower levels of butyric acid. Centrifugation as well as incorporation of high heat-treated centrifugate into cheese milk seemed to have little effect on the volatile profile of Maasdam cheese, except for butyric acid levels. Overall, this study suggests that centrifugation of milk before cheesemaking is a suitable method for controlling undesirable butyric acid fermentation without significantly altering the levels of other volatile organic compounds of Maasdam cheese.