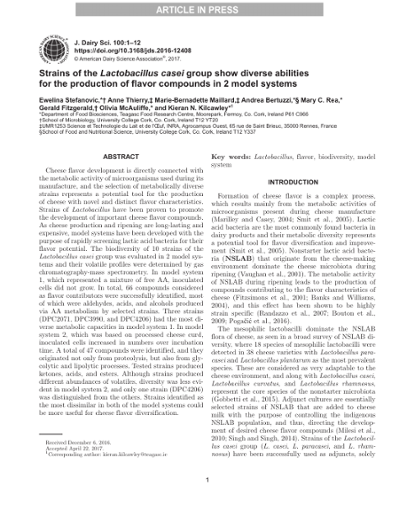 Cheese flavor development is directly connected to the metabolic activity of microorganisms used during its manufacture, and the selection of metabolically diverse strains represents a potential tool for the production of cheese with novel and distinct flavor characteristics. Strains of Lactobacillus have been proven to promote the development of important cheese flavor compounds. As cheese production and ripening are long-lasting and expensive, model systems have been developed with the purpose of rapidly screening lactic acid bacteria for their flavor potential. The biodiversity of 10 strains of the Lactobacillus casei group was evaluated in 2 model systems and their volatile profiles were determined by gas chromatography-mass spectrometry. In model system 1, which represented a mixture of free AA, inoculated cells did not grow. In total, 66 compounds considered as flavor contributors were successfully identified, most of which were aldehydes, acids, and alcohols produced via AA metabolism by selected strains. Three strains (DPC2071, DPC3990, and DPC4206) had the most diverse metabolic capacities in model system 1. In model system 2, which was based on processed cheese curd, inoculated cells increased in numbers over incubation time. A total of 47 compounds were identified, and they originated not only from proteolysis, but also from glycolytic and lipolytic processes. Tested strains produced ketones, acids, and esters. Although strains produced different abundances of volatiles, diversity was less evident in model system 2, and only one strain (DPC4206) was distinguished from the others. Strains identified as the most dissimilar in both of the model systems could be more useful for cheese flavor diversification.