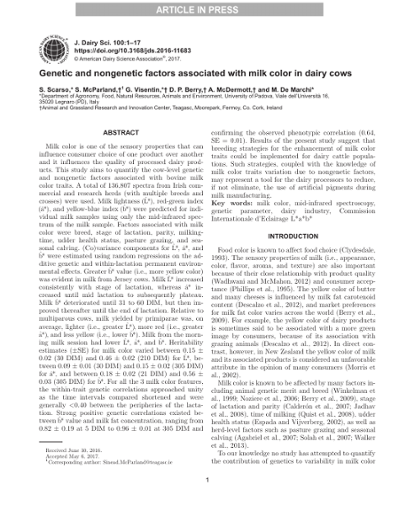 Milk color is one of the sensory properties that can influence consumer choice of one product over another and it influences the quality of processed dairy products. This study aims to quantify the cow-level genetic and nongenetic factors associated with bovine milk color traits. A total of 136,807 spectra from Irish commercial and research herds (with multiple breeds and crosses) were used. Milk lightness (Lˆ*) , red-green index (aˆ*) and yellow-blue index (bˆ*) were predicted for individual milk samples using only the mid-infrared spectrum of the milk sample. Factors associated with milk color were breed, stage of lactation, parity, milking-time, udder health status, pasture grazing, and seasonal calving. (Co)variance components for Lˆ*,aˆ* , and bˆ* were estimated using random regressions on the additive genetic and within-lactation permanent environmental effects. Greater bˆ* value (i.e., more yellow color) was evident in milk from Jersey cows. Milk Lˆ* increased consistently with stage of lactation, whereas aˆ* increased until mid lactation to subsequently plateau. Milk bˆ* deteriorated until 31 to 60 DIM, but then improved thereafter until the end of lactation. Relative to multiparous cows, milk yielded by primiparae was, on average, lighter (i.e., greater Lˆ* ), more red (i.e., greater aˆ* ), and less yellow (i.e., lower bˆ* ). Milk from the morning milk session had lower Lˆ*,aˆ*, and bˆ* Heritability estimates (±SE) for milk color varied between 0.15 ± 0.02 (30 DIM) and 0.46 ± 0.02 (210 DIM) for Lˆ* , between 0.09 ± 0.01 (30 DIM) and 0.15 ± 0.02 (305 DIM) for aˆ* , and between 0.18 ± 0.02 (21 DIM) and 0.56 ± 0.03 (305 DIM) for bˆ* For all the 3 milk color features, the within-trait genetic correlations approached unity as the time intervals compared shortened and were generally <0.40 between the peripheries of the lactation. Strong positive genetic correlations existed between bˆ* value and milk fat concentration, ranging from 0.82 ± 0.19 at 5 DIM to 0.96 ± 0.01 at 305 DIM and confirming the observed phenotypic correlation (0.64, SE = 0.01). Results of the present study suggest that breeding strategies for the enhancement of milk color traits could be implemented for dairy cattle populations. Such strategies, coupled with the knowledge of milk color traits variation due to nongenetic factors, may represent a tool for the dairy processors to reduce, if not eliminate, the use of artificial pigments during milk manufacturing.