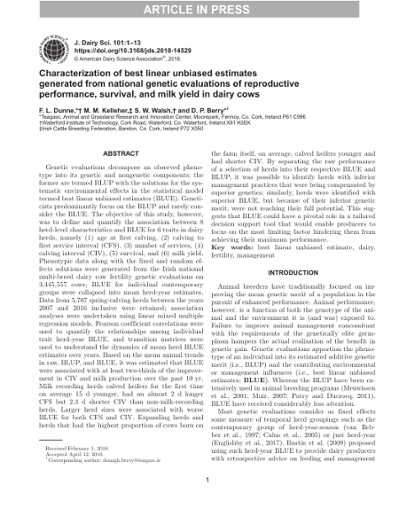 Genetic evaluations decompose an observed phenotype into its genetic and nongenetic components; the former are termed BLUP with the solutions for the systematic environmental effects in the statistical model termed best linear unbiased estimates (BLUE). Geneticists predominantly focus on the BLUP and rarely consider the BLUE. The objective of this study, however, was to define and quantify the association between 8 herd-level characteristics and BLUE for 6 traits in dairy herds, namely (1) age at first calving, (2) calving to first service interval (CFS), (3) number of services, (4) calving interval (CIV), (5) survival, and (6) milk yield. Phenotypic data along with the fixed and random effects solutions were generated from the Irish national multi-breed dairy cow fertility genetic evaluations on 3,445,557 cows; BLUE for individual contemporary groups were collapsed into mean herd-year estimates. Data from 5,707 spring-calving herds between the years 2007 and 2016 inclusive were retained; association analyses were undertaken using linear mixed multiple regression models. Pearson coefficient correlations were used to quantify the relationships among individual trait herd-year BLUE, and transition matrices were used to understand the dynamics of mean herd BLUE estimates over years. Based on the mean annual trends in raw, BLUP, and BLUE, it was estimated that BLUE were associated with at least two-thirds of the improvement in CIV and milk production over the past 10 yr. Milk recording herds calved heifers for the first time on average 15 d younger, had an almost 2 d longer CFS but 2.3 d shorter CIV than non-milk-recording herds. Larger herd sizes were associated with worse BLUE for both CFS and CIV. Expanding herds and herds that had the highest proportion of cows born on the farm itself, on average, calved heifers younger and had shorter CIV. By separating the raw performance of a selection of herds into their respective BLUE and BLUP, it was possible to identify herds with inferior management practices that were being compensated by superior genetics; similarly, herds were identified with superior BLUE, but because of their inferior genetic merit, were not reaching their full potential. This suggests that BLUE could have a pivotal role in a tailored decision support tool that would enable producers to focus on the most limiting factor hindering them from achieving their maximum performance.