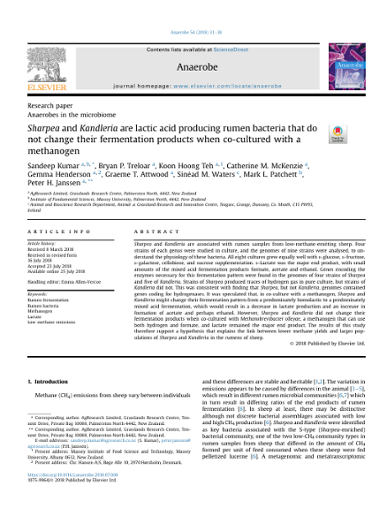 Sharpea and Kandleria are associated with rumen samples from low-methane-emitting sheep. Four strains of each genus were studied in culture, and the genomes of nine strains were analysed, to understand the physiology of these bacteria. All eight cultures grew equally well with d-glucose, d-fructose, d-galactose, cellobiose, and sucrose supplementation. d-Lactate was the major end product, with small amounts of the mixed acid fermentation products formate, acetate and ethanol. Genes encoding the enzymes necessary for this fermentation pattern were found in the genomes of four strains of Sharpea and five of Kandleria. Strains of Sharpea produced traces of hydrogen gas in pure culture, but strains of Kandleria did not. This was consistent with finding that Sharpea, but not Kandleria, genomes contained genes coding for hydrogenases. It was speculated that, in co-culture with a methanogen, Sharpea and Kandleria might change their fermentation pattern from a predominately homolactic to a predominately mixed acid fermentation, which would result in a decrease in lactate production and an increase in formation of acetate and perhaps ethanol. However, Sharpea and Kandleria did not change their fermentation products when co-cultured with Methanobrevibacter olleyae, a methanogen that can use both hydrogen and formate, and lactate remained the major end product. The results of this study therefore support a hypothesis that explains the link between lower methane yields and larger populations of Sharpea and Kandleria in the rumens of sheep.