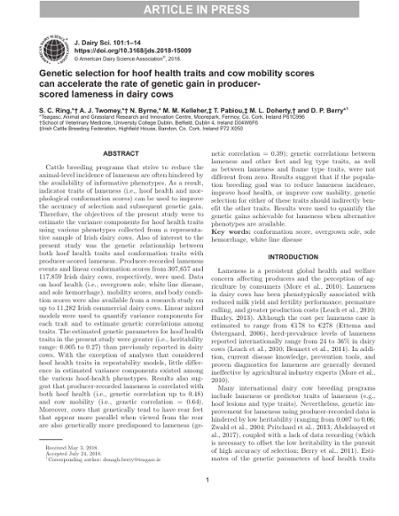 Cattle breeding programs that strive to reduce the animal-level incidence of lameness are often hindered by the availability of informative phenotypes. As a result, indicator traits of lameness (i.e., hoof health and morphological conformation scores) can be used to improve the accuracy of selection and subsequent genetic gain. Therefore, the objectives of the present study were to estimate the variance components for hoof health traits using various phenotypes collected from a representative sample of Irish dairy cows. Also of interest to the present study was the genetic relationship between both hoof health traits and conformation traits with producer-scored lameness. Producer-recorded lameness events and linear conformation scores from 307,657 and 117,859 Irish dairy cows, respectively, were used. Data on hoof health (i.e., overgrown sole, white line disease, and sole hemorrhage), mobility scores, and body condition scores were also available from a research study on up to 11,282 Irish commercial dairy cows. Linear mixed models were used to quantify variance components for each trait and to estimate genetic correlations among traits. The estimated genetic parameters for hoof health traits in the present study were greater (i.e., heritability range: 0.005 to 0.27) than previously reported in dairy cows. With the exception of analyses that considered hoof health traits in repeatability models, little difference in estimated variance components existed among the various hoof-health phenotypes. Results also suggest that producer-recorded lameness is correlated with both hoof health (i.e., genetic correlation up to 0.48) and cow mobility (i.e., genetic correlation = 0.64). Moreover, cows that genetically tend to have rear feet that appear more parallel when viewed from the rear are also genetically more predisposed to lameness (genetic correlation = 0.39); genetic correlations between lameness and other feet and leg type traits, as well as between lameness and frame type traits, were not different from zero. Results suggest that if the population breeding goal was to reduce lameness incidence, improve hoof health, or improve cow mobility, genetic selection for either of these traits should indirectly benefit the other traits. Results were used to quantify the genetic gains achievable for lameness when alternative phenotypes are available.