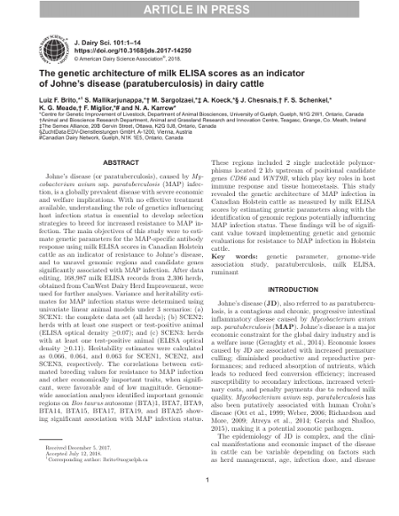 Johne's disease (or paratuberculosis), caused by Mycobacterium avium ssp. paratuberculosis (MAP) infection, is a globally prevalent disease with severe economic and welfare implications. With no effective treatment available, understanding the role of genetics influencing host infection status is essential to develop selection strategies to breed for increased resistance to MAP infection. The main objectives of this study were to estimate genetic parameters for the MAP-specific antibody response using milk ELISA scores in Canadian Holstein cattle as an indicator of resistance to Johne's disease, and to unravel genomic regions and candidate genes significantly associated with MAP infection. After data editing, 168,987 milk ELISA records from 2,306 herds, obtained from CanWest Dairy Herd Improvement, were used for further analyses. Variance and heritability estimates for MAP infection status were determined using univariate linear animal models under 3 scenarios: (a) SCEN1: the complete data set (all herds); (b) SCEN2: herds with at least one suspect or test-positive animal (ELISA optical density ≥0.07); and (c) SCEN3: herds with at least one test-positive animal (ELISA optical density ≥0.11). Heritability estimates were calculated as 0.066, 0.064, and 0.063 for SCEN1, SCEN2, and SCEN3, respectively. The correlations between estimated breeding values for resistance to MAP infection and other economically important traits, when significant, were favorable and of low magnitude. Genome-wide association analyses identified important genomic regions on Bos taurus autosome (BTA)1, BTA7, BTA9, BTA14, BTA15, BTA17, BTA19, and BTA25 showing significant association with MAP infection status. These regions included 2 single nucleotide polymorphisms located 2 kb upstream of positional candidate genes CD86 and WNT9B, which play key roles in host immune response and tissue homeostasis. This study revealed the genetic architecture of MAP infection in Canadian Holstein cattle as measured by milk ELISA scores by estimating genetic parameters along with the identification of genomic regions potentially influencing MAP infection status. These findings will be of significant value toward implementing genetic and genomic evaluations for resistance to MAP infection in Holstein cattle.