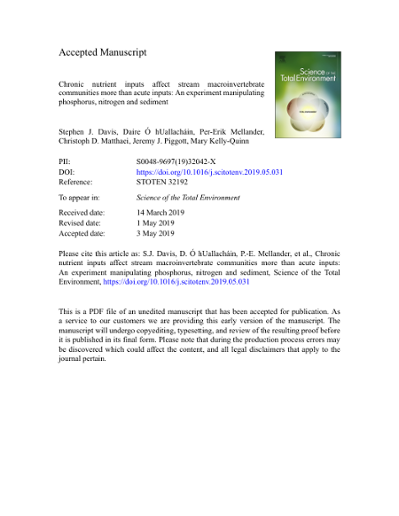 Freshwaters worldwide are affected by multiple stressors. Timing of inputs and pathways of delivery can influence the impact stressors have on freshwater communities. In particular, effects of point versus diffuse nutrient inputs on stream macroinvertebrates are poorly understood. Point-source inputs tend to pose a chronic problem, whereas diffuse inputs tend to be acute with short concentration spikes. We manipulated three key agricultural stressors, phosphorus (ambient, chronic, acute), nitrogen (ambient, chronic, acute) and fine sediment (ambient, high), in 112 stream mesocosms (26 days colonisation, 18 days of manipulations) and determined the individual and combined effects of these stressors on stream macroinvertebrate communities (benthos and drift). Chronic nutrient treatments continuously received high concentrations of P and/or N. Acute channels received the same continuous enrichment, but concentrations were doubled during two 3-hour periods (day 6, day 13) to simulate acute nutrient inputs during rainstorms. Sediment was the most pervasive stressor in the benthos, reducing total macroinvertebrate abundance and richness, EPT (mayflies, stoneflies, caddisflies) abundance and richness. By contrast, N or P enrichment did not affect any of the six studied community-level metrics. In the drift assemblage, enrichment effects became more prevalent the longer the experiment went on. Sediment was the dominant driver of drift responses at the beginning of the experiment. After the first acute nutrient pulse, sediment remained the most influential stressor but its effects started to fade. After the second pulse, N became the dominant stressor. In general, impacts of either N or P on the drift were due to chronic exposure, with acute nutrient pulses having no additional effects. Overall, our findings imply that cost-effective management should focus on mitigating sediment inputs first and tackle chronic nutrient inputs second. Freshwater managers should also take into account the length of exposure to high nutrient concentrations, rather than merely the concentrations themselves.