Association of season and herd size with somatic cell count for cows in Irish, English, and Welsh dairy herds 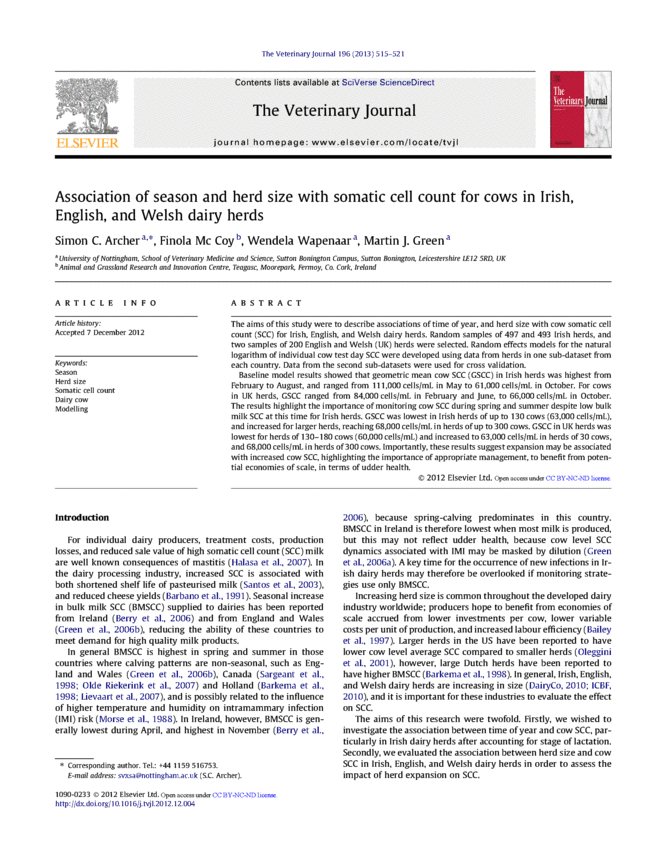 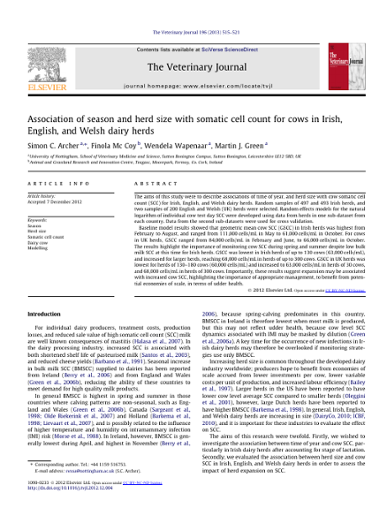 The aims of this study were to describe associations of time of year, and herd size with cow somatic cell count (SCC) for Irish, English, and Welsh dairy herds. Random samples of 497 and 493 Irish herds, and two samples of 200 English and Welsh (UK) herds were selected. Random effects models for the natural logarithm of individual cow test day SCC were developed using data from herds in one sub-dataset from each country. Data from the second sub-datasets were used for cross validation. Baseline model results showed that geometric mean cow SCC (GSCC) in Irish herds was highest from February to August, and ranged from 111,000 cells/mL in May to 61,000 cells/mL in October. For cows in UK herds, GSCC ranged from 84,000 cells/mL in February and June, to 66,000 cells/mL in October. The results highlight the importance of monitoring cow SCC during spring and summer despite low bulk milk SCC at this time for Irish herds. GSCC was lowest in Irish herds of up to 130 cows (63,000 cells/mL), and increased for larger herds, reaching 68,000 cells/mL in herds of up to 300 cows. GSCC in UK herds was lowest for herds of 130–180 cows (60,000 cells/mL) and increased to 63,000 cells/mL in herds of 30 cows, and 68,000 cells/mL in herds of 300 cows. Importantly, these results suggest expansion may be associated with increased cow SCC, highlighting the importance of appropriate management, to benefit from potential economies of scale, in terms of udder health.