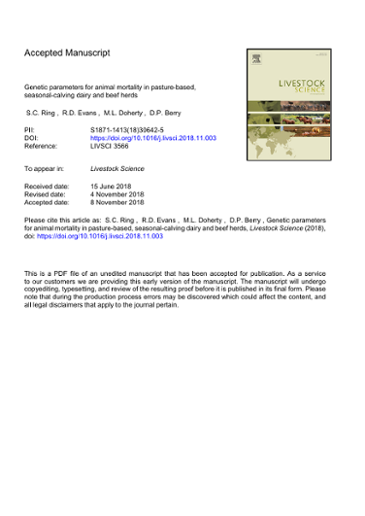 In the absence of informative health and welfare phenotypes, breeding for reduced animal mortality could improve overall health and welfare, provided genetic variability in animal mortality exists. The objective of the present study was to estimate genetic (and other) variance components for animal mortality in pasture-based, seasonal-calving dairy and beef herds across multiple life stages as well as to quantify the genetic relationship in mortality among life stages. National mortality records were available for all cattle born in the Republic of Ireland. Cattle were grouped into three life stages based on age (0 to 30 days, 31 to 365 days, 366 to 1095 days) whereas females with ≥1 calving event were also grouped into five life stages, based on parity number (1, 2, 3, 4, and 5), considering both the initial 60 days of lactation and a cow's entire lactation period, separately. The mean mortality prevalence ranged from 0.70 to 5.79% in young animals and from 0.53 to 3.86% in cows. Variance components and genetic correlations were estimated using linear mixed models using 21,637 to 100,993 records. Where heritability estimates were different from zero, direct heritability estimates for mortality in young animals (≤1095 days) ranged from 0.006 to 0.040, whereas the genetic standard deviation ranged from 0.015 to 0.034. The contribution of a maternal genetic effect to mortality in young animals was evident up to 30 days of age in dairy herds, but this was only the case in preliminary analysis of stillbirths in beef herds. Based on the estimated genetic standard deviation in the present study, the incidence of mortality in young animals could be reduced through breeding by up to 3.4 percentage units per generation. For cows, direct heritability estimates for mortality, where different from zero, ranged from 0.003 to 0.049. The genetic standard deviation for mortality in cows ranged from 0.005 to 0.016 during the initial 60 days of lactation and ranged from 0.011 to 0.032 during the cow's entire lactation. Genetic correlations among the age groups as well as between the age groups and cow parities had high standard errors. Genetic correlations among the cow parities were moderate to strongly positive (ranging from 0.66 to 0.99) and mostly different from zero. Results from the present study can be used to inform genetic evaluations for mortality in young animals and in cows as well as the potential genetic gain achievable.