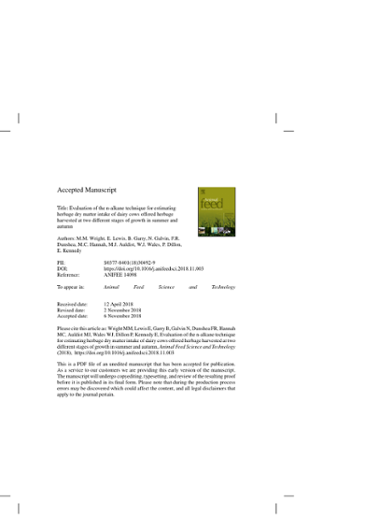 The n-alkane technique for estimating herbage dry matter intake (DMI) of dairy cows was investigated in this experiment. Eight Holstein-Friesian dairy cows were offered perennial ryegrass ad libitum that had been harvested at two different herbage masses and during two different seasons, in order to assess the effect of herbage mass and season on the accuracy of the n-alkane technique. Two pre-harvested herbage mass treatments (low, target 1500 kg DM/ha versus high, target 4000 kg DM/ha, measured above 4 cm), were investigated in a crossover factorial arrangement within each of two seasons (summer versus autumn), in Ireland. Each season consisted of two periods, each 12 days in length. Cows were housed in individual metabolism stalls to allow for accurate determination of measured DMI. Herbage DMI was estimated, with the n-alkane technique, by dosing cows twice daily with a C32 n-alkane. Pre-harvest herbage mass and season did not affect the n-alkane estimated DMI, although lack of season and herbage mass effects may have been masked by variation that occurred between swards within the same herbage mass and season. However, there were a number of differences between summer and autumn in the fecal recovery rates of a number of n-alkanes suggesting that the effect of season requires further investigation prior to the application of recovery rates from literature values when investigating diet selection and botanical composition. Overall, the n-alkane technique provided good estimates of DMI; the discrepancy had a standard deviation due to sward of 1.2 and 1.0 kg DM/cow per day, and hence potential bias of up to twice this, and a measurement error standard deviation of 1.3 and 1.0 kg DM/cow per day, for the C33/C32 and C31/C32 n-alkane pair methods respectively. Two n-alkane pairs were tested, and C33/C32 n-alkane provided the most precise estimates of DMI, compared with the C31/C32 n-alkane pair. This research provides some strong evidence for future use of the n-alkane technique including that the accuracy of the technique has not been influenced by contemporary changes to herbage management, is not affected by seasonal changes, and overall is an accurate and precise technique for estimating DMI.