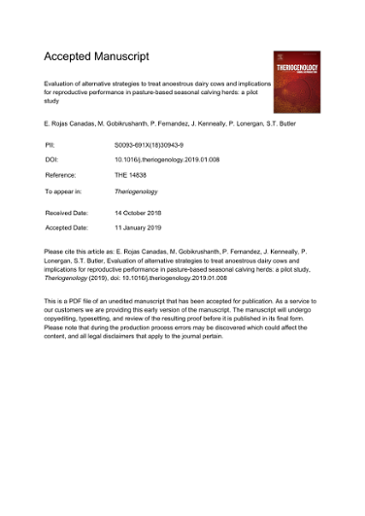 The objective of the present study was to assess the effects on ovulation and reproductive performance of a single injection of either GnRH or hCG applied 9 days before the start of the seasonal breeding period in anovulatory anoestrus cows compared with a 7-day progesterone-Ovsynch protocol. The study was conducted on four grass-based seasonal calving dairy herds in Ireland. The total number of cows in the herds was 2112, of which 488 were diagnosed as anoestrus based on absence of behavioural oestrus during a 30 day period. Ovarian structures and the uterus were examined by transrectal ultrasound on all 488 presumptive anestrus cows 9 days before mating start date (MSD). The number of corpora lutea (CL), number of large follicles (≥10 mm) and uterine reproductive tract score were recorded. Only cows that had no CL, ultrasound reproductive tract score ≤2 and were ≥30 days in milk (DIM) were enrolled in the study (n = 214). Cows were blocked by parity, DIM and body condition score and randomly assigned to one of four treatments: i.m. injection of gonadotropin releasing hormone analogue [GnRH; (n = 57)], i.m. injection of human chorionic gonadotropin [hCG; (n = 48)], 7-day Progesterone-Ovsynch protocol [P4OV; (n = 60)] and Control (no hormonal intervention, n = 49). A second ultrasound examination was performed 7 days after treatment to determine ovulatory response. There was a treatment effect on ovulation rate (P < 0.0001), whereby Control cows had a lesser ovulation rate compared with GnRH-, hCG- and P4OV-treated cows. Submission rate during the first 21 days of the breeding period [SR21; (P = 0.74)], pregnant to first service [P/AI1; (P = 0.24)], pregnant within 42 days after the onset of breeding [P42; (P = 0.73)], and pregnant within 84 days after the onset of breeding were not affected by treatment. A tendency was observed (P = 0.07) for greater likelihood of pregnancy within 21 days after the onset of breeding (P21) for P4OV and Control cows compared with GnRH- and hCG-treated cows. GnRH- and hCG-treated cows tended (P = 0.10) to have greater P/AI1 when first service events occurred after day 21 of the breeding period compared with Control cows. P4OV cows had shorter MSD to first service interval (P = 0.0001) and shorter MSD to conception interval (P = 0.02) compared with Control, GnRH- and hCG-treated cows. In conclusion, treatment of anestrous cows with GnRH or hCG resulted in an increase in ovulation rate compared with untreated Control cows, but did not improve reproductive performance during the first 21 days of the breeding season. The best reproductive performance results were obtained with the P4OV treatment, but this treatment has the greatest cost, and has the greatest number of interventions. The observation of good P/AI1 in hCG- and GnRH- treated cows when the first insemination occurred later than day 21 after MSD warrants further investigation, and suggests that these interventions should be applied earlier than 9 days before the farm MSD.