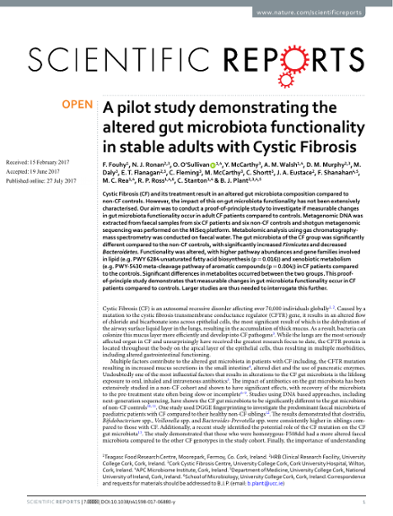 Cystic Fibrosis (CF) and its treatment result in an altered gut microbiota composition compared to non-CF controls. However, the impact of this on gut microbiota functionality has not been extensively characterised. Our aim was to conduct a proof-of-principle study to investigate if measurable changes in gut microbiota functionality occur in adult CF patients compared to controls. Metagenomic DNA was extracted from faecal samples from six CF patients and six non-CF controls and shotgun metagenomic sequencing was performed on the MiSeq platform. Metabolomic analysis using gas chromatography-mass spectrometry was conducted on faecal water. The gut microbiota of the CF group was significantly different compared to the non-CF controls, with significantly increased Firmicutes and decreased Bacteroidetes. Functionality was altered, with higher pathway abundances and gene families involved in lipid (e.g. PWY 6284 unsaturated fatty acid biosynthesis (p = 0.016)) and xenobiotic metabolism (e.g. PWY-5430 meta-cleavage pathway of aromatic compounds (p = 0.004)) in CF patients compared to the controls. Significant differences in metabolites occurred between the two groups. This proof-of-principle study demonstrates that measurable changes in gut microbiota functionality occur in CF patients compared to controls. Larger studies are thus needed to interrogate this further.