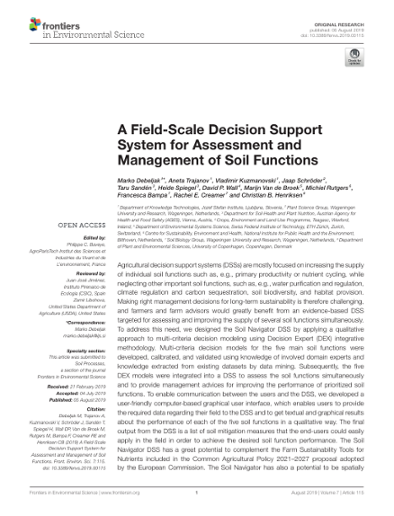 Agricultural decision support systems (DSSs) are mostly focused on increasing the supply of individual soil functions such as, e.g., primary productivity or nutrient cycling, while neglecting other important soil functions, such as, e.g., water purification and regulation, climate regulation and carbon sequestration, soil biodiversity, and habitat provision. Making right management decisions for long-term sustainability is therefore challenging, and farmers and farm advisors would greatly benefit from an evidence-based DSS targeted for assessing and improving the supply of several soil functions simultaneously. To address this need, we designed the Soil Navigator DSS by applying a qualitative approach to multi-criteria decision modeling using Decision Expert (DEX) integrative methodology. Multi-criteria decision models for the five main soil functions were developed, calibrated, and validated using knowledge of involved domain experts and knowledge extracted from existing datasets by data mining. Subsequently, the five DEX models were integrated into a DSS to assess the soil functions simultaneously and to provide management advices for improving the performance of prioritized soil functions. To enable communication between the users and the DSS, we developed a user-friendly computer-based graphical user interface, which enables users to provide the required data regarding their field to the DSS and to get textual and graphical results about the performance of each of the five soil functions in a qualitative way. The final output from the DSS is a list of soil mitigation measures that the end-users could easily apply in the field in order to achieve the desired soil function performance. The Soil Navigator DSS has a great potential to complement the Farm Sustainability Tools for Nutrients included in the Common Agricultural Policy 2021–2027 proposal adopted by the European Commission. The Soil Navigator has also a potential to be spatially upgraded to assist decisions on which soil functions to prioritize in a specific region or member state. Furthermore, the Soil Navigator DSS could be used as an educational tool for farmers, farm advisors, and students, and its potential should be further exploited for the benefit of farmers and the society as a whole.