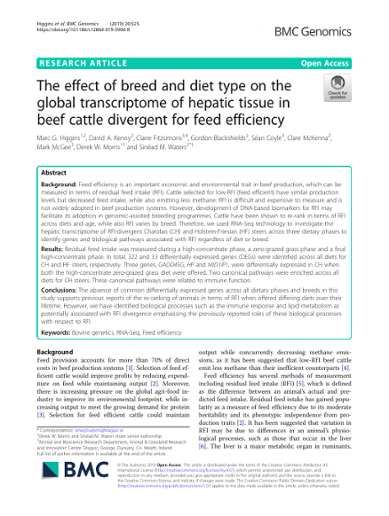 Background: Feed efficiency is an important economic and environmental trait in beef production, which can be measured in terms of residual feed intake (RFI). Cattle selected for low-RFI (feed efficient) have similar production levels but decreased feed intake, while also emitting less methane. RFI is difficult and expensive to measure and is not widely adopted in beef production systems. However, development of DNA-based biomarkers for RFI may facilitate its adoption in genomic-assisted breeding programmes. Cattle have been shown to re-rank in terms of RFI across diets and age, while also RFI varies by breed. Therefore, we used RNA-Seq technology to investigate the hepatic transcriptome of RFI-divergent Charolais (CH) and Holstein-Friesian (HF) steers across three dietary phases to identify genes and biological pathways associated with RFI regardless of diet or breed. Results: Residual feed intake was measured during a high-concentrate phase, a zero-grazed grass phase and a final high-concentrate phase. In total, 322 and 33 differentially expressed genes (DEGs) were identified across all diets for CH and HF steers, respectively. Three genes, GADD45G, HP and MID1IP1, were differentially expressed in CH when both the high-concentrate zero-grazed grass diet were offered. Two canonical pathways were enriched across all diets for CH steers. These canonical pathways were related to immune function. Conclusions: The absence of common differentially expressed genes across all dietary phases and breeds in this study supports previous reports of the re-ranking of animals in terms of RFI when offered differing diets over their lifetime. However, we have identified biological processes such as the immune response and lipid metabolism as potentially associated with RFI divergence emphasising the previously reported roles of these biological processes with respect to RFI.