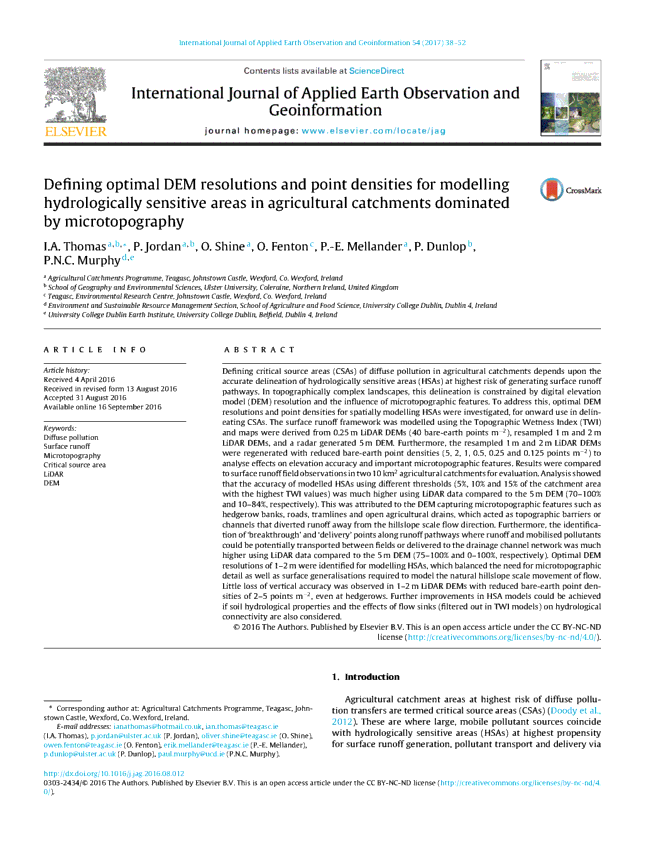 Defining critical source areas (CSAs) of diffuse pollution in agricultural catchments depends upon the accurate delineation of hydrologically sensitive areas (HSAs) at highest risk of generating surface runoff pathways. In topographically complex landscapes, this delineation is constrained by digital elevation model (DEM) resolution and the influence of microtopographic features. To address this, optimal DEM resolutions and point densities for spatially modelling HSAs were investigated, for onward use in delineating CSAs. The surface runoff framework was modelled using the Topographic Wetness Index (TWI) and maps were derived from 0.25 m LiDAR DEMs (40 bare-earth points m−2), resampled 1 m and 2 m LiDAR DEMs, and a radar generated 5 m DEM. Furthermore, the resampled 1 m and 2 m LiDAR DEMs were regenerated with reduced bare-earth point densities (5, 2, 1, 0.5, 0.25 and 0.125 points m−2) to analyse effects on elevation accuracy and important microtopographic features. Results were compared to surface runoff field observations in two 10 km2 agricultural catchments for evaluation. Analysis showed that the accuracy of modelled HSAs using different thresholds (5%, 10% and 15% of the catchment area with the highest TWI values) was much higher using LiDAR data compared to the 5 m DEM (70–100% and 10–84%, respectively). This was attributed to the DEM capturing microtopographic features such as hedgerow banks, roads, tramlines and open agricultural drains, which acted as topographic barriers or channels that diverted runoff away from the hillslope scale flow direction. Furthermore, the identification of ‘breakthrough’ and ‘delivery’ points along runoff pathways where runoff and mobilised pollutants could be potentially transported between fields or delivered to the drainage channel network was much higher using LiDAR data compared to the 5 m DEM (75–100% and 0–100%, respectively). Optimal DEM resolutions of 1–2 m were identified for modelling HSAs, which balanced the need for microtopographic detail as well as surface generalisations required to model the natural hillslope scale movement of flow. Little loss of vertical accuracy was observed in 1–2 m LiDAR DEMs with reduced bare-earth point densities of 2–5 points m−2, even at hedgerows. Further improvements in HSA models could be achieved if soil hydrological properties and the effects of flow sinks (filtered out in TWI models) on hydrological connectivity are also considered.