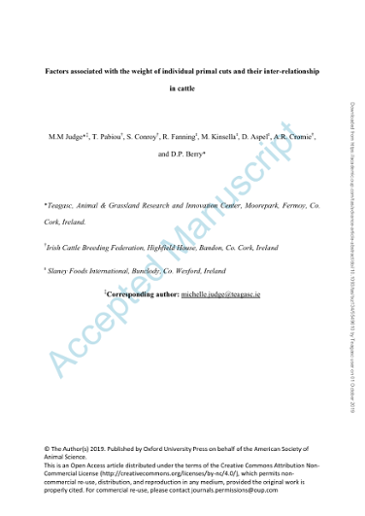 Input parameters for decision support tools are comprised of, amongst others, knowledge of the associated factors and the extent of those associations with the animal-level feature of interest. The objective of the present study was to quantify the association between the animal-level factors with primal cut yields in cattle and to understand the extent of the variability in primal cut yields independent of other primal cuts or as carcass weight itself. The data used consisted of the weight of 14 primal carcass cuts (as well as carcass weight, conformation and fat score) on up to 54,250 young cattle slaughtered between 2013 and 2017. Linear mixed models, with contemporary group of herd-sex-season of slaughter as a random effect, were used to quantify the associations between a range of model fixed effects with each primal cut separately. Fixed effects in the model were dam parity, heterosis coefficient, recombination loss, a covariate per breed representing the proportion of Angus, Belgian Blue, Charolais, Jersey, Hereford, Limousin, Simmental, and Holstein-Friesian and a three-way interaction between whether the animal was born in a dairy or beef herd, sex, and age at slaughter, with or without carcass weight as a covariate in the mixed model. The raw correlations among all cuts were all positive varying from 0.33 (between the bavette and the striploin) to 0.93 (between the topside and knuckle). The partial correlation among cuts, following adjustment for differences in carcass weight, varied from -0.36 to 0.74. Age at slaughter, sex, dam parity and breed were all associated (P<0.05) with the primal cut weight. Knowledge of the relationship between the individual primal cuts, and the solutions from the models developed in the study, could prove useful inputs for decision support systems level to increase performance.