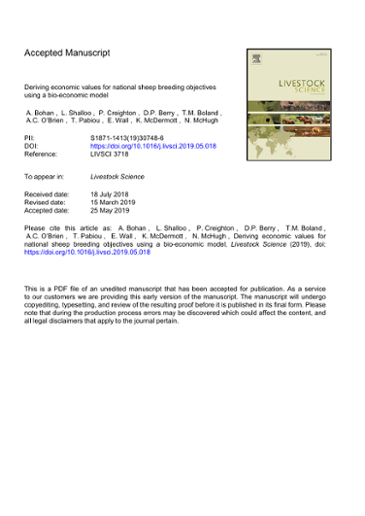 The economic value of a trait in a breeding objective can be defined as the value of a unit change in an individual trait, while keeping all other traits constant and are widely used in the development of breeding objectives internationally. The objective of this study was to provide a description of the development of economic values for the pertinent traits included in the Irish national sheep breeding objectives using a whole farm system bio-economic model. A total of fourteen traits of economic importance representing maternal, lambing, production and health characteristics were calculated within a whole farm bio-economic model. The model was parameterised to represent an average Irish flock of 107 ewes with a mean lambing date in early March, stocked at 7.5 ewes per hectare and weaning 1.5 lambs per ewe joined to the ram. The economic values (units in parenthesis) calculated for maternal traits were: €39.76 for number of lambs born (per lamb), €0.12 for ewe mature weight cull value (per kg), −€0.57 for ewe mature weight maintenance value (per kg), −€0.09 for ewe mature weight replacement value (per kg) and −€0.84 for ewe replacement rate (per%). The economic values calculated for lambing traits were: €54.84 for lamb surviving at birth (per lamb), −€0.27 and −€0.30 for direct lambing difficulty in single and multiple-bearing ewes, respectively (per%); the corresponding values for maternal single and multiple lambing difficulty (per%) were −€0.25 and −€0.27, respectively. The calculated economic values for production traits were: −€0.25 for days to slaughter (per day), €3.70 for carcass Conformation (per EUROP grade) and −€0.84 for carcass fat (per fat score). The economic values for health traits were: −€0.24 for ewe lameness (per%), −€0.08 for lamb lameness (per%), −€0.25 for mastitis (per%), −€0.34 for dag score (per dag score) and −€0.08 for faecal egg count (per 50 eggs/g). Within the two Irish breeding objectives, the terminal and replacement breeding objective, the greatest emphasis was placed on production traits across both the terminal (62.56%) and replacement (41.65%) breeding objectives. The maternal and lambing traits accounted for the 34.19% and 23.45% of the emphasis within the replacement breeding objective, respectively. Results from this study will enable the implementation of new economic values within the national terminal and replacement Irish sheep breeding objectives which highlights the traits of importance for increasing overall farm profitability.

Department of Agriculture, Food and Marine

Except where otherwise noted, this item's license is described as © 2019 Elsevier B.V. All rights reserved.