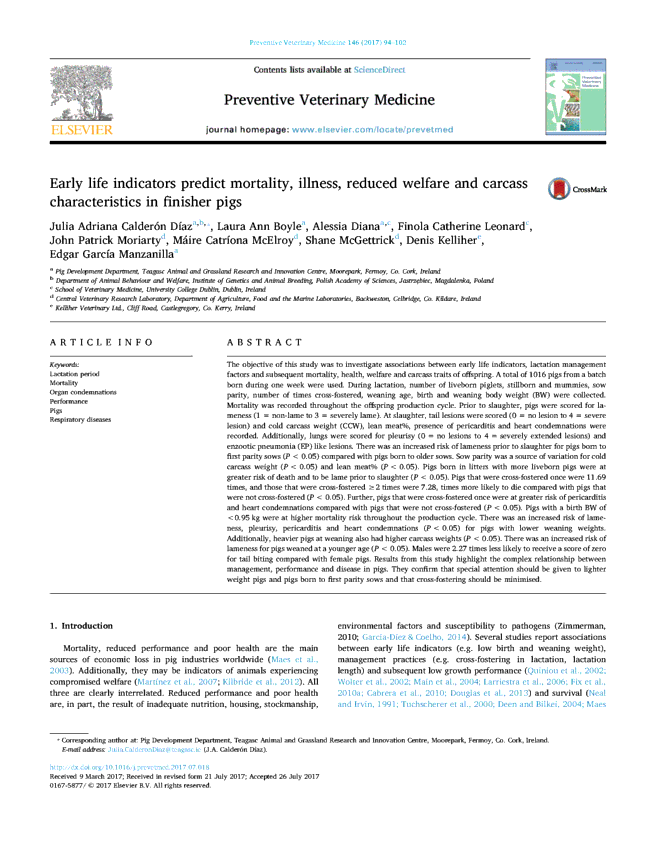 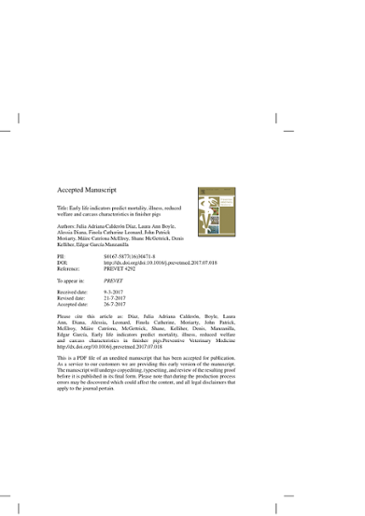 The objective of this study was to investigate associations between early life indicators, lactation management factors and subsequent mortality, health, welfare and carcass traits of offspring. A total of 1016 pigs from a batch born during one week were used. During lactation, number of liveborn piglets, stillborn and mummies, sow parity, number of times cross-fostered, weaning age, birth and weaning body weight (BW) were collected. Mortality was recorded throughout the offspring production cycle. Prior to slaughter, pigs were scored for lameness (1 = non-lame to 3 = severely lame). At slaughter, tail lesions were scored (0 = no lesion to 4 = severe lesion) and cold carcass weight (CCW), lean meat%, presence of pericarditis and heart condemnations were recorded. Additionally, lungs were scored for pleurisy (0 = no lesions to 4 = severely extended lesions) and enzootic pneumonia (EP) like lesions. There was an increased risk of lameness prior to slaughter for pigs born to first parity sows (P < 0.05) compared with pigs born to older sows. Sow parity was a source of variation for cold carcass weight (P < 0.05) and lean meat% (P < 0.05). Pigs born in litters with more liveborn pigs were at greater risk of death and to be lame prior to slaughter (P < 0.05). Pigs that were cross-fostered once were 11.69 times, and those that were cross-fostered ≥2 times were 7.28, times more likely to die compared with pigs that were not cross-fostered (P < 0.05). Further, pigs that were cross-fostered once were at greater risk of pericarditis and heart condemnations compared with pigs that were not cross-fostered (P < 0.05). Pigs with a birth BW of <0.95 kg were at higher mortality risk throughout the production cycle. There was an increased risk of lameness, pleurisy, pericarditis and heart condemnations (P < 0.05) for pigs with lower weaning weights. Additionally, heavier pigs at weaning also had higher carcass weights (P < 0.05). There was an increased risk of lameness for pigs weaned at a younger age (P < 0.05). Males were 2.27 times less likely to receive a score of zero for tail biting compared with female pigs. Results from this study highlight the complex relationship between management, performance and disease in pigs. They confirm that special attention should be given to lighter weight pigs and pigs born to first parity sows and that cross-fostering should be minimised.