The harmonized INFOGEST in vitro digestion method: From knowledge to action 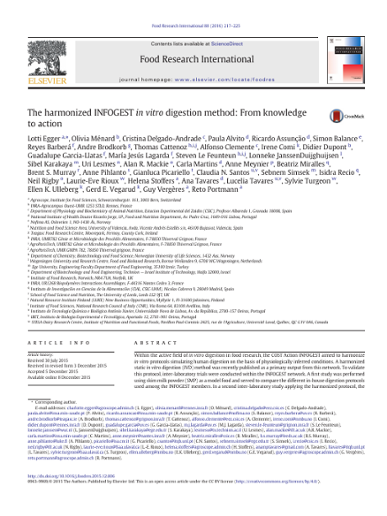 Within the active field of in vitro digestion in food research, the COST Action INFOGEST aimed to harmonize in vitro protocols simulating human digestion on the basis of physiologically inferred conditions. A harmonized static in vitro digestion (IVD) method was recently published as a primary output from this network. To validate this protocol, inter-laboratory trials were conducted within the INFOGEST network. A first study was performed using skim milk powder (SMP) as a model food and served to compare the different in-house digestion protocols used among the INFOGEST members. In a second inter-laboratory study applying the harmonized protocol, the degree of consistency in protein hydrolysis was investigated. Analysis of the hydrolyzed proteins, after the gastric and intestinal phases, showed that caseins were mainly hydrolyzed during the gastric phase, whereas β-lactoglobulin was, as previously shown, resistant to pepsin. Moreover, generation of free amino acids occurred mainly during the intestinal phase. The study also showed that a few critical steps were responsible for the remaining inter-laboratory variability. The largest deviations arose from the determination of pepsin activity. Therefore, this step was further clarified, harmonized, and implemented in a third inter-laboratory study. The present work gives an overview of all three inter-laboratory studies, showing that the IVD INFOGEST method has led to an increased consistency that enables a better comparability of in vitro digestion studies in the future.