An ethogram of biter and bitten pigs during an ear biting event: first step in the development of a Precision Livestock Farming tool 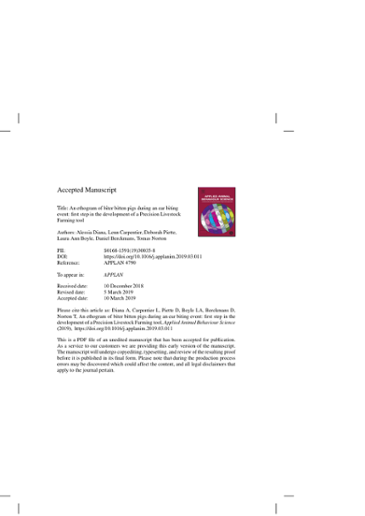 Pigs reared in intensive farming systems are more likely to develop damaging behaviours such as tail and ear biting (EB) due to their difficulty in coping with the environment and their inability to perform natural behaviours. However, much less is known about the aetiology of EB behaviour compared to tail biting behaviour. Application of new intervention strategies may be the key to deal with this welfare issue. The discipline of Precision Livestock Farming (PLF) allows farmers to improve their management practices with the use of advanced technologies. Exploring the behaviour is the first step to identify reliable indicators for the development of such a tool. Therefore, the aim of this study was to develop an ethogram of biter and bitten pigs during an EB event and to find potential features for the development of a tool that can monitor EB events automatically and continuously. The observational study was carried out on a 300 sow farrow-to-finish commercial farm in Ireland (Co. Cork) during the first and second weaner stages. Three pens per stage holding c. 35 pigs each, six pens in total, were video recorded and 2.2 h of videos per pen were selected for video analysis. Two ethograms were developed, one for the biter and one for the bitten pig, to describe their behavioural repertoire. Behaviours were audio-visually labelled using ELAN and afterwards the resulting labels were processed using MATLAB® 2014. For the video data, duration and frequency of the observed behavioural interactions were quantified. Six behaviours were identified for the biter pig and a total of 710 interactions were observed: chewing (215 cases), quick bite (138 cases), pulling ear (97 cases), shaking head (11 cases), gentle manipulation (129 cases) and attempt to EB (93 cases). When the behaviour observed was not certain, it was classified as doubt (27 cases). Seven behaviours were identified for the bitten pig in response to the biters behaviour and were divided in: four non-vocal behaviours described as biting (40 cases), head knocking (209 cases), shaking/moving head (225 cases) or moving away (156 cases); and three vocal behaviours identified as scream (74 cases), grunt (166 cases), and squeal (125 cases). Vocal behaviours were classified using a verified set of features yielding a precision of 83.2%. A significant difference in duration was found between all the behaviours (P < 0.001), except between gentle manipulation and chewing where no difference in duration was found (P < 0.338). The results illustrate the heterogeneity of EB behaviours, which may be used to better understand this poorly studied damaging behaviour. They also indicate potential for the development of a PLF tool to automatically, continuously monitor such behaviour on farm by combining the behaviour of the biter pig and the bitten pigs responses.