Candidate genes associated with the heritable humoral response to Mycobacterium avium ssp. paratuberculosis in dairy cows have factors in common with gastrointestinal diseases in humans 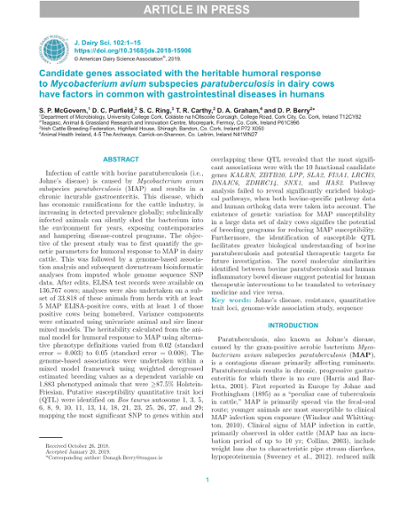 Infection of cattle with bovine paratuberculosis (i.e., Johne's disease) is caused by Mycobacterium avium ssp. paratuberculosis (MAP) and results in a chronic incurable gastroenteritis. This disease, which has economic ramifications for the cattle industry, is increasing in detected prevalence globally; subclinically infected animals can silently shed the bacterium into the environment for years, exposing contemporaries and hampering disease-control programs. The objective of the present study was to first quantify the genetic parameters for humoral response to MAP in dairy cattle. This was followed by a genome-based association analysis and subsequent downstream bioinformatic analyses from imputed whole genome sequence SNP data. After edits, ELISA test records were available on 136,767 cows; analyses were also undertaken on a subset of 33,818 of these animals from herds with at least 5 MAP ELISA-positive cows, with at least 1 of those positive cows being homebred. Variance components were estimated using univariate animal and sire linear mixed models. The heritability calculated from the animal model for humoral response to MAP using alternative phenotype definitions varied from 0.02 (standard error = 0.003) to 0.05 (standard error = 0.008). The genome-based associations were undertaken within a mixed model framework using weighted deregressed estimated breeding values as a dependent variable on 1,883 phenotyped animals that were ≥87.5% Holstein-Friesian. Putative susceptibility quantitative trait loci (QTL) were identified on Bos taurus autosome 1, 3, 5, 6, 8, 9, 10, 11, 13, 14, 18, 21, 23, 25, 26, 27, and 29; mapping the most significant SNP to genes within and overlapping these QTL revealed that the most significant associations were with the 10 functional candidate genes KALRN, ZBTB20, LPP, SLA2, FI3A1, LRCH3, DNAJC6, ZDHHC14, SNX1, and HAS2. Pathway analysis failed to reveal significantly enriched biological pathways, when both bovine-specific pathway data and human ortholog data were taken into account. The existence of genetic variation for MAP susceptibility in a large data set of dairy cows signifies the potential of breeding programs for reducing MAP susceptibility. Furthermore, the identification of susceptible QTL facilitates greater biological understanding of bovine paratuberculosis and potential therapeutic targets for future investigation. The novel molecular similarities identified between bovine paratuberculosis and human inflammatory bowel disease suggest potential for human therapeutic interventions to be translated to veterinary medicine and vice versa.