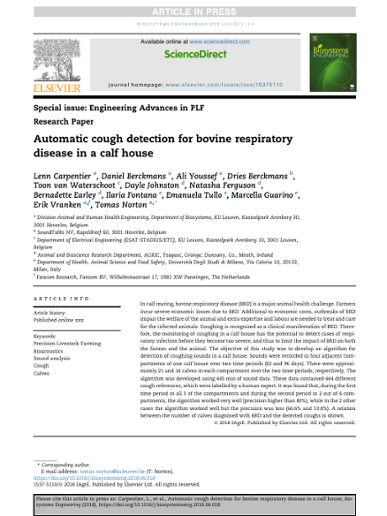 In calf rearing, bovine respiratory disease (BRD) is a major animal health challenge. Farmers incur severe economic losses due to BRD. Additional to economic costs, outbreaks of BRD impair the welfare of the animal and extra expertise and labour are needed to treat and care for the infected animals. Coughing is recognised as a clinical manifestation of BRD. Therefore, the monitoring of coughing in a calf house has the potential to detect cases of respiratory infection before they become too severe, and thus to limit the impact of BRD on both the farmer and the animal. The objective of this study was to develop an algorithm for detection of coughing sounds in a calf house. Sounds were recorded in four adjacent compartments of one calf house over two time periods (82 and 96 days). There were approximately 21 and 14 calves in each compartment over the two time-periods, respectively. The algorithm was developed using 445 min of sound data. These data contained 664 different cough references, which were labelled by a human expert. It was found that, during the first time period in all 3 of the compartments and during the second period in 2 out of 4 compartments, the algorithm worked very well (precision higher than 80%), while in the 2 other cases the algorithm worked well but the precision was less (66.6% and 53.8%). A relation between the number of calves diagnosed with BRD and the detected coughs is shown.