The effect of dairy cow breed on milk production, cow traffic and milking characteristics in a pasture-based automatic milking system 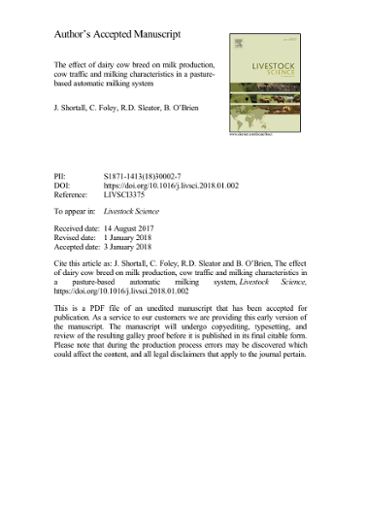 Despite the increasing frequency of integrated automatic milking (AM) and pasture-based systems, there is limited knowledge available on the suitability of different dairy cow breeds to these systems. Thus, the objective of this experiment was to establish the performance of three breeds in a pasture-based AM system with respect to milk production, cow traffic and milking characteristics. The breeds examined were Holstein Friesian (HF), Jersey x HF (JEX) and Norwegian Red x HF (NRX), all of which have been previously identified as being compatible with conventional milking pasture-based systems. The experiment was conducted in mid-lactation and variables measured included milking frequency, -interval, -outcome and -characteristics, milk yield/milking and per day, wait time/visit and per day, return time/visit and the daily distribution of milking events. Data were statistically analysed using least squares means mixed procedure models, while the proportion of different milking events were analysed using the logistics procedure. While there were no significant differences between breeds for milking frequency, or milk production, significant differences did exist for proportion of successful and failed milkings events, with NRX cows recording the highest and lowest proportions, respectively. JEX also recorded a significantly shorter dead time/quarter at 17.6 s/milking compared to the HF and NRX breeds at 28.5 and 27.7 s/milking, respectively. Significant differences also existed with regard to cow traffic, with the NRX breed returning from pasture more quickly and waiting a shorter time both per visit and per day in the pre-milking yard. The distribution of milking events differed between the breeds examined, with the JEX cows recording less milkings in the hour after the pre-selection gate changes of 0000 h and 1600 h. JEX also recorded a significantly greater proportion of milkings than the NRX and HF cows during the hours at which the lowest proportion of total milking events were recorded (0400–0600 h). For the optimisation of the AM system it is important to have an even distribution of milkings throughout the day. Based on the evidence from the current experiment, this may be best achieved by a mixed breed herd rather than a single breed herd. However, the performance of the examined breeds should also be analysed in the context of the whole AM farm system, over an entire lactation, taking into consideration the range of variables that contribute to a profitable farm system.