Effect of phytase, carbohydrase, and protease addition to a wheat distillers dried grains with solubles and rapeseed based diet on in vitro ileal digestibility, growth, and bone mineral density of grower-finisher pigs 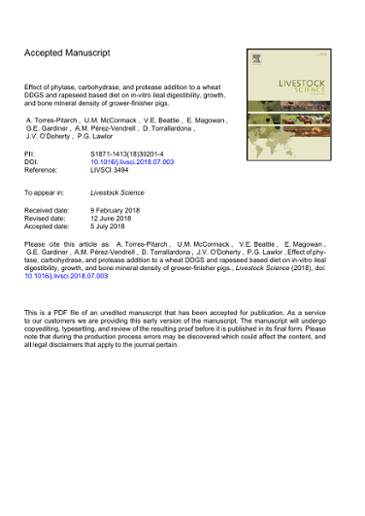 The use of rapeseed meal (RSM) and wheat distillers dried grains with solubles (wDDGS) in pig diets is increasing and dietary supplementation with exogenous enzymes has been suggested as means of improving feed efficiency in pigs. The objective of this experiment was to examine the effect of phytase (Phy), a xylanase and β-glucanase complex (XB), protease (Prot) and their various combinations when included in a wDDGS- and RSM-based diet fed to grower-finisher pigs. As the P- and Ca- sparing effect of Phy is well proven, the objective was to examine the additional effects of Phy beyond its P- and Ca-sparing effects. A total of 144 pigs with an initial live weight of 40.1 ± 2.0 kg were assigned to 8 treatments with 9 pens (4 female and 5 male pens) per treatment and 2 females or 2 males per pen. The basal diet was formulated to contain 96 and 200 g/kg of RSM and wDDGS, respectively. The basal diet was supplemented with Phy (0 or 100 mg/kg), XB (0 or 100 mg/kg), and Prot (0 or 200 mg/kg) in a 2 × 2 × 2 factorial arrangement of treatments. Experimental diets were fed for 76 d. Average daily gain (ADG) and average daily feed intake (ADFI) were recorded, and gain to feed (G:F) was calculated. Carcass quality variables were measured at slaughter and the left forelimb of pigs fed the unsupplemented, the Phy supplemented and the Phy + Prot supplemented diets were removed to determine bone mineral density in the third metacarpal. The inclusion of Phy, XB and Prot in the diets increased in vitro ileal digestibility of dry matter and organic matter (P < 0.05). A tendency towards a 3-way interaction among Phy, XB and Prot was observed for ADG (P = 0.06) and G:F (P = 0.06). The 2-way interactions and main effects did not reveal any improvement for any variable measured in vivo in response to dietary enzyme supplementation. Bone mineral density was not different for pigs fed the unsupplemented, the Phy supplemented and the Phy + Prot supplemented diets. In conclusion, the in vitro ileal digestibility improvements observed were not always reflected in improvements in pig growth, feed efficiency or both. The efficacy of Phy was not reduced when supplemented in combination with Prot, as ADG, G:F, carcass quality and bone mineralization were unchanged.