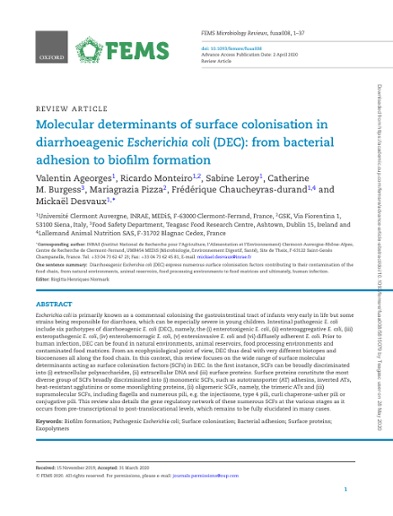 Escherichia coli is primarily known as a commensal colonising the gastrointestinal tract of infants very early in life but some strains being responsible for diarrhoea, which can be especially severe in young children. Intestinal pathogenic E. coli include six pathotypes of diarrhoeagenic E. coli (DEC), namely, the (i) enterotoxigenic E. coli, (ii) enteroaggregative E. coli, (iii) enteropathogenic E. coli, (iv) enterohemorragic E. coli, (v) enteroinvasive E. coli and (vi) diffusely adherent E. coli. Prior to human infection, DEC can be found in natural environments, animal reservoirs, food processing environments and contaminated food matrices. From an ecophysiological point of view, DEC thus deal with very different biotopes and biocoenoses all along the food chain. In this context, this review focuses on the wide range of surface molecular determinants acting as surface colonisation factors (SCFs) in DEC. In the first instance, SCFs can be broadly discriminated into (i) extracellular polysaccharides, (ii) extracellular DNA and (iii) surface proteins. Surface proteins constitute the most diverse group of SCFs broadly discriminated into (i) monomeric SCFs, such as autotransporter (AT) adhesins, inverted ATs, heat-resistant agglutinins or some moonlighting proteins, (ii) oligomeric SCFs, namely, the trimeric ATs and (iii) supramolecular SCFs, including flagella and numerous pili, e.g. the injectisome, type 4 pili, curli chaperone-usher pili or conjugative pili. This review also details the gene regulatory network of these numerous SCFs at the various stages as it occurs from pre-transcriptional to post-translocational levels, which remains to be fully elucidated in many cases.