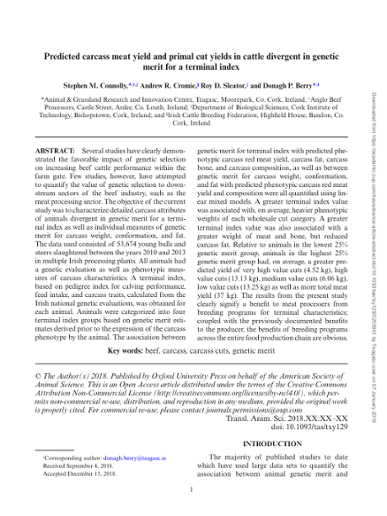 Several studies have clearly demonstrated the favorable impact of genetic selection on increasing beef cattle performance within the farm gate. Few studies, however, have attempted to quantify the value of genetic selection to downstream sectors of the beef industry, such as the meat processing sector. The objective of the current study was to characterize detailed carcass attributes of animals divergent in genetic merit for a terminal index as well as individual measures of genetic merit for carcass weight, conformation, and fat. The data used consisted of 53,674 young bulls and steers slaughtered between the years 2010 and 2013 in multiple Irish processing plants. All animals had a genetic evaluation as well as phenotypic measures of carcass characteristics. A terminal index, based on pedigree index for calving performance, feed intake, and carcass traits, calculated from the Irish national genetic evaluations, was obtained for each animal. Animals were categorized into four terminal index groups based on genetic merit estimates derived prior to the expression of the carcass phenotype by the animal. The association between genetic merit for terminal index with predicted phenotypic carcass red meat yield, carcass fat, carcass bone, and carcass composition, as well as between genetic merit for carcass weight, conformation, and fat with predicted phenotypic carcass red meat yield and composition were all quantified using linear mixed models. A greater terminal index value was associated with, on average, heavier phenotypic weights of each wholesale cut category. A greater terminal index value was also associated with a greater weight of meat and bone, but reduced carcass fat. Relative to animals in the lowest 25% genetic merit group, animals in the highest 25% genetic merit group had, on average, a greater predicted yield of very high value cuts (4.52 kg), high value cuts (13.13 kg), medium value cuts (6.06 kg), low value cuts (13.25 kg) as well as more total meat yield (37 kg). The results from the present study clearly signify a benefit to meat processers from breeding programs for terminal characteristics; coupled with the previously documented benefits to the producer, the benefits of breeding programs across the entire food production chain are obvious.